Human foot is as flexible as that of great apes 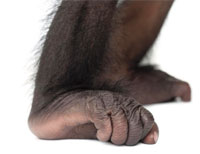 DECADES-OLD notion that shoes should keep the arch of foot stiffly supported might not be right after all. A recent study shows that despite having abandoned tree life long ago, human feet still are surprisingly flexible just like the feet of treedwelling great apes, such as orangutans and chimpanzees.

The understanding of how humans started walking is largely based on studies done during the 1930s. According to those studies, human feet is unique in design and functions very differently from the feet of other apes. This has been attributed to the development of arches in the mid-foot region of humans and the supposed rigidity of that on the outside edge of the foot. It was assumed that because we possess lateral and medial arches in our feet, they differ markedly from the feet of our nearest relatives, whose mid-foot is fully flexible and makes regular ground contact. The supposed ‘uniqueness’, however, had never been quantitatively tested.

The recent study by researchers from University of Liverpool in the UK quashes this long-standing belief. The researchers reached the conclusion after studying more than 25,000 human steps made on a pressure-sensitive treadmill at the university’s Gait Laboratory. The researchers found that the range of pressures exerted under the human mid-foot, and thus the internal mechanisms that drive them, were highly variable, so much so that they actually overlapped with those made by the great apes.

It has previously been thought that humans who make contact with the ground with the mid-foot region are primarily those that suffer from diabetes or arthritis, both of which can impact on the structure of the feet. Research showed, however, that two-thirds of normal healthy subjects produced some footfalls where the mid-foot touches the ground, with no indication that this is other than an aspect of normal healthy walking.