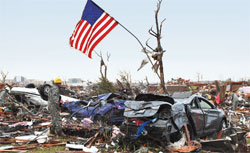 An award-winning Oklahoma television meteorologist has been deemed “irresponsible” for telling viewers to get in their cars and flee approaching tornadoes. The advice given by Mike Morgan, chief meteorologist for Oklahoma City TV station KFOR and 11-time winner of weather broadcast award in the state, was in stark contrast to the common advice given in the event of a twister which is to seek refuge in cellars and other underground facilities.

Viewers blamed Morgan for putting people in danger on clogged roads on June 7.

Some people said they followed his advice and ended up stuck in traffic jams on highways as a storm bore down on the Oklah oma City area. Oklahoma Governor called the traffic situation on June 7 a “nightmare” after it was confirmed that some of the 20 deceased were found dead after being sucked out of cars by the storm.