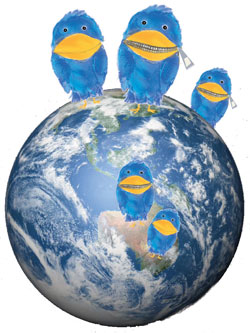 Twitter announced that upon request it can block tweets in countries where they are deemed illegal. The removed content would, however, be available to the rest of the world. Earlier, when the social network would delete a tweet, it would disappear worldwide.

In its blog post on January 26, the micro-blogging site said: “As we continue to grow internationally, we will enter countries that have different ideas about the contours of freedom of expression”, for instance, France and Germany ban pro-Nazi content.

The move immediately prompted outcry, arguments and even calls for a boycott from many users who say it is a significant departure from Twitter’s tone just a year ago, when anti-government protesters in Tunisia, Egypt and other Arab countries coordinated mass demonstrations on the social network and in the process thrust its potential as a free-speech tool into the global spotlight.

According to The New York Times, critics on Twitter surmised that the company had been pressed to adopt country-specific censorship after a major investment by a Saudi prince, though Twitter dismissed the claim.