Two paragraphs too many 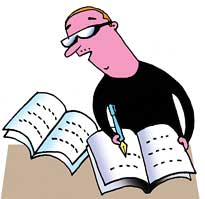 Two paragraphs in its introductory section have blighted an article on stem cell research. Graham Parker, editor of Stem Cells and Development, told the science journal Nature that his publication was retracting the study by scientists at Britain's Newcastle University because two paragraphs were plagiarized.

Newcastle University blamed the plagiarism on a research associate who has left the institution, and said the science behind the research, and its conclusions, were not in question. Parker too does not doubt the veracity of the study, but Nature quoted him as saying that half of the introduction paragraphs were plagiarized from a 2007 review in the journal Biology of Reproduction.

Scientists are divided. "This is clearly scientific misconduct," said Allan Pacey, secretary for the British Fertility Society. "I can understand why people might think, if they were sloppy here, maybe they were sloppy elsewhere." Harry Moore of Centre for Stem Cell Biology at UK's Sheffield University said, "The paper was overhyped."

Elizabeth Wager, who heads an international committee on publication ethics, applauded the decision. "Editors have a responsibility to correct the record if misconduct has occurred," she said.