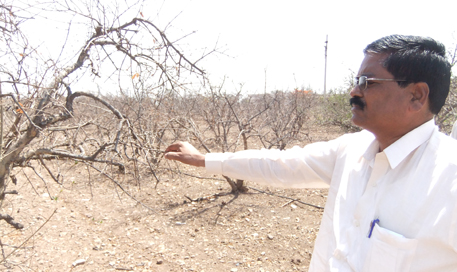 Drought has again hit large parts of Maharashtra this year. But the worst affected are two talukas in Sangli district. Jat and Atpadi are facing the worst drought in decades, despite river Krishna flowing 100 km away. Analysts blame the plight on poor management of groundwater and lax attitude of the state government in extending irrigation facilities to the region that falls in the rain shadow area of the Western Ghats.

People in these talukas are adept at making do with meagre rainfall. Traditionally they grow sorghum, pearl millet and wheat that require less water. But some two decades ago, lured by the profits earned by farmers in western Sangli, which has adequate irrigation facilities from the Krishna Valley project, Jat and Atpadi farmers began growing cash crops. “Commercial cultivation of the crops forced them to over-exploit groundwater,” says Chintamani Sahasrabuddhe, bureau chief of Marathi daily Pudhari. Within years the talukas notched a place in the world map of pomegranate producing areas. But since 2005 the region has been witnessing a drastic change in rainfall pattern (see table). This year there is no rain at all. With rainfall playing truant, farmers have nearly exhausted their groundwater resources. “Till last year, only the wealthy farmers could manage their crops despite the water shortage by deepening their borewells,” says Anandrao Patil from Atpadi. “This year even they are in trouble,” he adds. Pomegranate trees on his 16 hectare orchard have dried up or withered, leading to heavy losses.

D R Jakhi, senior geologist at Sangli, says the water level could have dipped below 300 metres in Jat and Atpadi. According to Sangli Zilla Parishad, 35 of 41 farm ponds and all dug wells in the talukas have dried up since March. Even the Atpadi lake has dried up. Civic administration is now digging the silt to extract the remaining water from the water body.

“Entire plantations in villages like Nelkaranji, Kharsundi, Tadvale, Bhingewadi, Jambhulai, Zare, Hiwtad, Atpadi, Banpuri, Dighanchi and Shetfal have died,” says Sarjerao Khilari, a farmer from Kargani village. He has not seen such a severe drought in his entire life. “We have barely enough water to sustain my family and 36 livestock,” says Khilari, as he helplessly watches his orchard of 15,000 pomegranate trees dying. Ashok Deshmukh, a farmer from Hiwtad village in Atpadi, who used to earn Rs 27 to Rs 30 lakh annually from pomegranate plantation on his one hectare land, has suffered losses to the tune of Rs 40 lakh this year. Unofficial estimates put the losses faced by farmers in the blocks to the tune of Rs 110 crore.

After declaring acute water shortage in 7,296 villages in 15 of the state’s 35 districts (see map) in March, the government issued a directive to ensure a supply of 20 litres of water per head every day to these villages. For the 200 villages in Atpadi and Jat, the administration has sanctioned 14,550 trips by 39 tankers. The government has also issued directives for supplying free fodder to cattle. But residents say they are getting water once in three to four days. 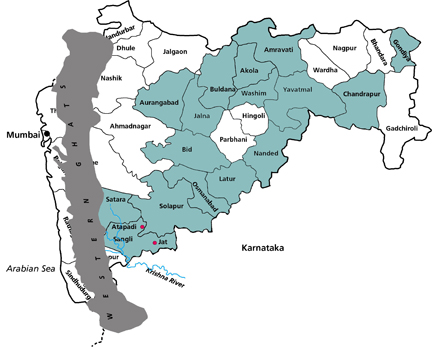 Vilas Jagtap, a Nationalist Congress Party leader in Sangli, says almost all the water resources in the region have dried up. So people are getting just five to 10 litres of water per head as against 20 liters and cattle are getting mere 200 to 250 gm fodder as against 15 kg per day.” According to cattle census, Jagtap says, 1,750 tonnes of fodder is required daily in Jat. But so far the government has provided only 3,802 tonnes.

Unable to feed the livestock, people are selling their cattle to slaughterhouses at throwaway prices. Several families are also migrating to Mumbai and Pune in search of work, the way they used to do before the pomegranate era began in the talukas.

“Drought is a natural cycle in the region that makes a comeback every three years,” says Sahasrabuddhe. “We cannot change this. But we can handle the situation with water resources management and by changing the crop pattern.”

Madhav Chitale, an expert of groundwater conservation in Sangli, says it is high time that the government undertook long-term water management in the rain shadow region. Retired geologist Suresh Khanapurkar says, “Aquifer recharge is the only solution to the problem. Deepening and widening of existing streams, nullahs and water bodies is the need of the hour. This will serve two purposes—accommodate additional water during floods and release stored water during crisis.” The government should study the changing rainfall pattern and undertake water resources management accordingly. Efforts should be made to arrest every drop of rain and make it percolate in the ground, he says.

Anandrao Patil says the completion of Tembhu irrigation scheme of Krishna Valley Project is the only way to save the farmers in the rain shadow region. “The scheme envisaged supplying irrigation and drinking water to Tasgaon, Kadepur, Jat and Atpadi talukas. The water has reached Tasgaon and Kadepur talukas. But there is no progress since last 15 years.

Arun Mane, state unit president of Maharashtra Rajya Shetkari Parishad who has been fighting for the cause of farmers since 1980, says: “All the funds given by the government for irrigation projects have turned out to be dead investment. The drought in the state is not natural; it is government-made calamity.” The situation can change if government takes up scientific management of rain water, ground water and water stored in lakes and ponds. The annual average rainfall in Jat and Atpadi talukas is around 300 mm. This is not a good rainfall, but sufficient to sustain traditional crops like sorghum, pearl millet and wheat. More than half of the rain water runs off as there is not mechanism to arrest it and force its percolation. According to Mane, there should be restriction on ground water resources exploitation and also on crop pattern. Taluka-level committees should be formed to monitor water extraction and its use. It has been observed that wealthy farmers are exploiting ground water resources as per their whims. Mane suggests banning sugar mills and prohibiting sugarcane cultivation and digging borewells in Jat and Atpadi talukas. Even if the farmers in that area save 10 per cent water, it will solve the problem of annual drinking water of drought hit area, Mane says.