To reduce pollution levels, it is becoming necessary to upgrade conventionally designed, two-stroke two- and three-wheeler engines with cleaner four-stroke ones. 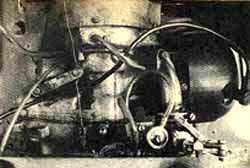 EFFORTS are on to develop cleaner technologies for the highly polluting two- and three-wheelers, whose number has increased six-fold from 1976 and 1992 and drastically brought down air quality in metropolitan areas.

Some 94 per cent of the two- and three-wheelers in India are powered by two-stroke engines that are simple and compact in design, cheap and easy to maintain. But conventionally designed two-stroke engines produce high levels of hydrocarbons in exhaust emissions -- 5,500 parts per million (ppm), compared which 850 ppm from four-stroke engines.

Complete combustion within the engine is essential to reduce pollution. The four-stroke engine is cleaner because it burns pure petrol; the two-stroke engine, on the other hand, burns a combination of lubricating oil and petrol and a fair amount of the oil is emitted as unburnt vapour.

B P Pundir, a scientist at the Indian Institute of Petroleum (IIP) in Dehra Dun, says, "Four-stroke engine-powered motor cycles have been observed to emit just one-sixth to one-tenth of the hydrocarbons emitted by two-stroke vehicles. In addition, their fuel economy is better by 20 to 50 per cent." However, manufacturers prefer two-stroke engines because they are more powerful and have greater pick-up.

Four-stroke engine technology is already in use and ready for commercialisation, particularly for engines with a capacity of 75-80 cc .In India, Hero Honda has been producing four-stroke engines since 1985 and Kawasaki Bajaj since 1991.

However, IIP scientists argue this is only an interim options. For a longterm solution, the two-stroke engine must be redesigned. Pundir says, "The newer two-stroke concept, which employs in-cylinder fuel injection systems, would emit fewer hydrocarbons than four-stroke engines."

Pundir cites vehicle emission studies done in Delhi and says, "It is estimated that two- and three-wheelers contribute 74 per cent of the total vehicular unburned hydrocarbon emissions in the city during 1990. Their contribution towards carbon monoxide was about 50 per cent, but their share in nitrogen oxide emissions is negligible."


With concern for air quality standards growing, significant technological advances have been made in developed countries. The conventional carburettor has been replaced by the direct, fuel- injection system. This vastly improves two-stroke engines, making them a potential alternative even for passenger car applications.

Two-stroke engine research programmes are being carried out by Ford, General Motors, Chrysler, Mazda, Toyota, Honda, Subaru and many small manufacturers. Ford has introduced a three-cylinder, two-stroke engine for its new generation of small cars, based on technology from the Orbital Engine Company of Australia.

Though, Indian manufacturers and the bureaucracy have been slow to respond, some manufacturers are now moving in this direction. India's largest two- and three-wheeler manufacturer, Bajaj Auto Ltd, has entered into collaboration with Orbital.

Most experts agree Orbital has done the pioneering work in developing the new two-stroke engines. Their new design, with its advanced electronic controls and air-assisted direct injection fuel system, is capable of meeting the most stringent exhaust emission standards. The engine, too, requires minimum maintenance. Bajaj is currently testing its new two-stroke vehicle -- Bajaj Super 125 FE -- which offers 70 to 80 per cent lower emissions than the current 150 cc vehicles.

Another option is to introduce catalytic converters that drastically reduce the level of pollutant emissions from internal combustion engines through a series of chemical reactions. However, Bajaj research and development chief G P Agarwal points out these are not produced in India and importing them will push up prices by at least Rs 3,000 per vehicle. Additionally, these would require lead-free petrol, which is also not available in India.

As a half-way effort, however, some two- and three-wheeler manufacturers are switching from two-stroke to four-stroke engines after the Ministry of Environment and Forests' announcement about regulating vehicle exhaust emissions with effect from 1995.