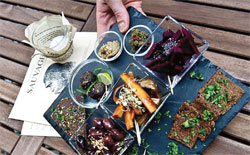 Unprocessed meat, fish, eggs, fruits, vegetables, nuts and herbs, lists the menu of a Berlin restaurant, which serves dishes made of ingredients that would have been available to hunter-gatherers of the Paleolithic or Stone Age. Sugar, bread, rice and dairy products are prohibited in this café, Sauvage. With a caveman logo, it claims to be the first Stone Age café in Eurasia. In an interview with German magazine Der Spiegel Sauvage’s owner Boris Leite-Poco said the “Paleo diet” results in greater energy levels, increased muscle mass, clearer skin and even an enhanced sex drive.

The trend, catching up as a worldwide phenomenon, is strongest in the US where people who have had enough of fast food and generations of illness have taken it up, says Leite-Poco, adding that he has a medication-free life since “going Paleo” two years ago. The obsessed ones, for instance a New York-based group called Evolutionary Fitness, are taking the trend a step further by doing caveman-era exercise—lifting boulders and running barefoot. The restaurateurs, however, do not cook over an open fire and use certain modern conveniences like the microwave.