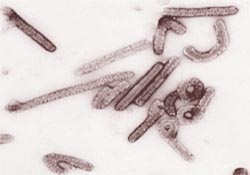 A team of scientists from the World Health Organisation (who) have begun their search for the Marburg virus in the jungles of eastern Congo. Earlier, laboratory tests showed that three out of nine samples of blood collected in the eastern Congo region in August had the Marburg virus, a relative of the Ebola disease. This has put Ugandan health officials on high alert.

According to who' s Kampala office, the team will be searching for the elusive source of recent outbreaks of hemorrhagic fever, that has been linked to Ebola and Marburg viruses. The who team, which includes epidemiologists and entomologists, comes in the wake of recent reports that scientists may have found a cure to the deadly fever in a plant used in traditional African medicine. Treatment may be available in two years if financial and scientific hurdles are removed, according to reports.

The source of the Marburg virus has not been identified as tests on bats and other rodents found in Durba mines, which were first suspected to be the source, have tested negative. The blood samples found positive were collected from patients in Durba in Province Orientale, between August 11 and August 20.

Professor Francis Omaswa, the director of health services in Uganda, told the daily, The East African, that three of the samples sent to South Africa's Special Pathogens Unit, National Institute for Virology, Sandringham, tested positive and Uganda had taken precautions to guard against the virus spreading. Health authorities, he said, are preparing to tackle the disease in case it spreads spreads to Uganda. The who had earlier considered sending a team of experts to the eastern part of the Democratic Republic of the Congo to try and locate the source of the Marburg virus.

An expert at the Uganda Virus Research Institute in Entebbe said they did not have anything on a possible new treatment but development of a new treatment for the deadly disease would be a significant advance.

Njie Hatib, who representative in Kampala, confirmed to The East African that three out of nine suspected cases of Marbug fever had turned out positive in tests conducted in South Africa in September. However, the who team of seven scientists will be focussing on how the recent outbreaks moved from their host to humans. According to reports published recently in the uk -based Times Higher Education Supplement, delegates to the 16th Botanic Congress held in the us were told that a plant used widely in traditional African medicine may contain active compounds against Ebola.

Maurice Iwu, the executive director of the Biological Resources Development says that an extract derived from Garcinia kola could inhibit Ebola at non-toxic concentrations.