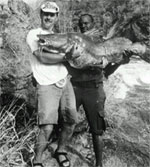 Good days may be ahead for the Ugandan fish exporters. A new laboratory in Kampala will enable them to meet contamination testing standards as demanded by the European Union (eu).

The eu had banned Ugandan fish imports in April this year. This seven-month-old ban has severely affected East African fish exports. The ban was imposed after reports of fish poisoning in Lake Victoria hit the headlines. Exports of chilled Nile perch, mostly flown to European markets, accounted for about 70-75 per cent of export volumes before the ban, said Marina Reusens of the Uganda Fish Processors and Exporters' Association.

The new laboratory, opened by Belgium-based Chemiphar, will assist fish processors to test for pesticide and other contamination in locally-caught fish. "We hope we will be able to give them the first samples for (pesticide residue) testing next week," said Philip Borel of fish processors Greenfield (Uganda) Ltd.

"The microbiology testing lab was set up in the first half of 1999, and they decided to go into the pesticide residue testing after the ban was imposed," Borel told reporters. But since April, demand for chilled fish has dwindled to almost nil, although Borel said small markets still exist in the us and Japan. Frozen fish export volumes, which have markets in the Gulf, East Asia and Australia, have recovered after an initial fall, but the price has continued to deteriorate.

"The prices are definitely 50 per cent lower than earlier," Borel said. "I do not think the price can drop much further." Ugandan fish exporters were disappointed by what they see as a very slow response to eu's verdict.

eu toxicologists visited Uganda, Tanzania and Kenya in August and the draft report of their findings was received by the Ugandan exporters last week -- nearly four weeks later. Borel said the report was supposed to arrive much earlier.

The eu's final report is not likely to be completed until the end of the year, he said. "If the problem is going to trail on for a large part of 2000, we see a number of factories collapsing," he said, adding: "It is a young industry and delays can be detrimental.