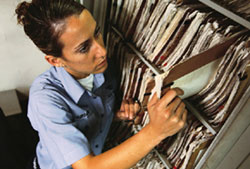 The uk's National Health Service (nhs) is poised to upload millions of personal medical records to a central national database from where information can be made available to police and security services according to the daily, The Guardian. Details of mental illnesses, abortions, pregnancy, hiv status, drug-taking or alcoholism may also be included, and there are no laws to prevent dna profiles being added. The uploading is planned under a 12 billion (about us $2.2 billion ) scheme to computerise uk's health service.

The system will start coming into effect in stages early next year, the paper states. Civil liberties critics have called the move "data rape".The British Medical Association also has reservations. "We believe that the government should get the explicit permission of patients before transferring their information," a spokesperson of the association said.

uk's health department has made it clear that the public will not be able to object to information being loaded on to the database "Patients do not have the right to say the information cannot be had," its spokesperson said. Once the data is uploaded, the onus is on patients to speak out if they do not want their records seen by other people. If they do object, an on-screen 'flag' will be added to their records. But any objection can be overridden "in the public interest".

The government claims that computerised "sealed envelopes" will allow patients selectively to protect sensitive parts of their uploaded history from being widely accessed. But according to The Guardian no such software exists.