But EU rejects its plan 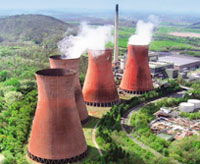 the European Commission (ec) has said that the uk can't increase the amount of carbon dioxide (co2) emissions allowed to its industry under the E uropean Union's (eu's) emissions trading scheme one of Europe's key instruments to meet commitments under the Kyoto Protocol.

The country had sought to change its original allocation of pollution rights to allow its industry to pump out an additional 20 million tonnes of co2 from 2005 to 2007.

Reacting to the eu executive body's ruling, the uk government accused the commission of hiding behind procedure. The country's power industry, which faces the toughest co2 limits under the eu scheme, said it was disappointed with the commission's decision and would look for ways to fight it. "The decision could cost us us $609.8 million a year, said David Porter, chief executive of the London-based Association of Electricity Producers.

Under the eu scheme, companies buy or sell rights to pollute, based on limits set by national governments, which are approved by the ec. The scheme covers highly polluting factories like power stations, oil refineries and cement plants. All eu governments have to submit their emission plans for the second trading period 2008-2012, by June 30, 2006.

When the ec initially rejected the changes in uk's plans, the country had gone to the eu's Court of First Instance. The court had sided with uk saying it was entitled to revise the plan. But the commission said it had studied the court's ruling and decided that the uk had missed the September 30, 2004 deadline to submit its proposed changes. "Since the uk amendment was notified after this deadline, the commission decided to reject the amended plan on the grounds of late submission, an ec official said.

uk officials say they are now studying a range of options, including further legal action. Ironically, the uk's move to allow industry to pollute more comes at a time when prime minister Tony Blair has made the fight against climate change a priority during Britain's presidency of the eu.