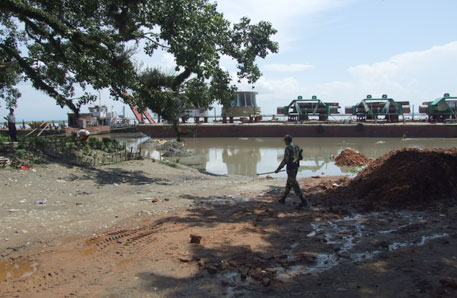 The anti big dam movement in Assam, which has over the last few years been strengthened with support from politicians and academicians, has found support from the United Liberation front of Asom-Independent or ULFA (I).

The ULFA (I) has also threatened to carry out an armed struggle to stop the construction of the Lower Subansiri Hydroelectric Power Project (LSHEP), a 2,000 MW project, and has said that the organisation is opposed to the construction of proposed mega dams in the northeast region.

Speaking to a reporter over the phone and from an undisclosed location, Paresh Asom, commander in chief of the ULFA (I), said that it is shocking that the Indian government is putting every effort to ensure completion of the Lower Subansiri project, despite experts saying that these dams could be catastrophic to the region.

“If the Indian government ignores the logic put forward by the people of Assam and restarts construction of the project, we will initiate an armed resistance," he said.

Paresh Asom further added that they are demanding for change in the geographical location of the project, downsizing of the project, ensuring every household in Assam gets electricity and increase in earthquake-resistance capability of dams. The demands also include a written promise from the Centre to give adequate compensation to affected families and a cumulative downstream impact study.

Expressing his anguish over Centre’s attitude, the ULFA (I) commander-in-chief said how could Union power minister Piyush Goyal push for the project when experts have already made it clear that the dam will bring devastation to the region.

Assam gets cold shoulder from Centre

A few days ago, on December 10 and 11, the Centre had invited the organisations who are opposed to the big dams for negotiations, to New Delhi, to participate in a consultation with the stake holders. At the meeting, barring the influential Krishak Multi Sangram Samiti (KMSS), an activist group which is spearheading the protest against the big dams in the region, all the other organisations agreed to the Centre’s suggestion of setting up of a eight-member expert committee, comprising of four each from Assam and the Centre.

“The expert committee would study Thatte and Reddy Committee’s report and analyse the cumulative downstream impact. The technical team would also consult experts from within and outside the country before submitting its reports,” said Samujjal Bhattacharyya, adviser of the influential All Assam Students Union (AASU), one of the 29 organisations protesting against the project.

The KMSS, however, has not agreed to the outcome of the consultation and has said that it demands the project to be scrapped.

“The meeting did not respect the sentiments of the people of Assam who had been protesting against big dams. The BJP-led government has started a big war against Assam," said Akhil Gogoi, secretary of the KMSS. He further added that the Lower Subansiri project would eliminate 206 fish species of the Subansiri river and threaten the existence of the people living near the bank.

Meanwhile, the KMSS has stepped up its protest against the big dams. The organisation organised a massive protest rally on December 16 in Guwahati. During the rally that was attended by several thousand people, Gogoi said that such protests will continue till the project is not scrapped.

Question raised in Rajya Sabha on impact of construction of hydro electric projects on Assam, 21/07/2014

Dam planning under the spotlight: a guide to dam sanctioning in India

Green clearance to HEPs in NE India: Issues and concerns