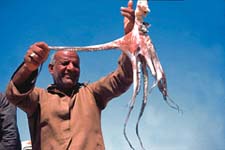 The UN Office for the Coordination of Humanitarian Affairs (OCHA) has urged Israel to immediately ease restrictions on the waters off the Gaza Strip. The request comes at the beginning of annual fishing high season. The UN body noted that Israel's restrictions have hit more than 40,000 people of the Gaza who are primarily dependent on the fishing industry.

April is the start of annual fishing high season, when fish migrate from the Nile Delta region in Egypt to Turkish waters across the Mediterranean Sea. Gaza's fisherfolk depend heavily on this catch.

Though currently governed by the Palestinian Authority, Gaza's airspace and offshore maritime access is controlled by Israel. In June 2006, Israel imposed a ban on the waters off Gaza following attacks by Palestinian militants. The ban was partly lifted recently, restricting fishing up to 11 km off the coast. Israel says these restrictions are needed to prevent Palestinians smuggling weapons into the Gaza.But they go against the 2002 UN-Israel agreement allowing fishing rights in Gaza up to 22 km off the coast. The Oslo Accord of 1993 between Israel and Palestine allows fishing up to 37 km off the coast.

According to OCHA, relaxation of the current restrictions is critical because these have confined fishing to areas close to shore resulting in poor returns.