According to the WWF Living Planet 2002 report, people are consuming more natural resources than nature can produce, and some more so than others. At this rate, the world may soon come to a grinding halt. 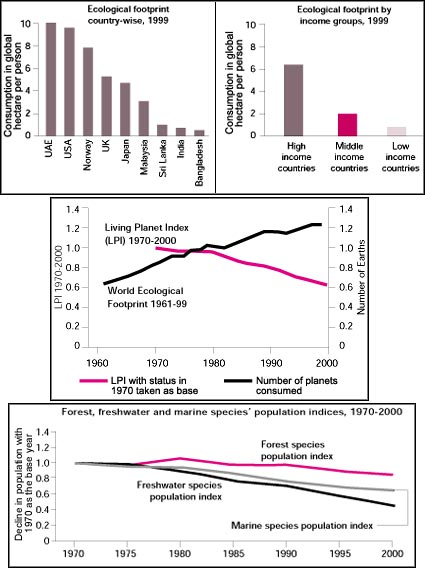 > People are using over 20 per cent more natural resources each year than can be regenerated. The ecological footprint of humankind is increasing. This overdraft will not last long.
In 1999, the Earth had 11.4 billion hectares of productive land and sea space, that is about 1.9 hectares of productive land per capita. Our global ecological footprint for that year, however, was 2.3 hectares per capita.

The Living Planet Index, based on trends in the populations of birds, mammals, reptiles, amphibians and fish, over the past 30 years has declined by about 37 per cent.

By 2050, humans will consume between 180 per cent and 220 per cent of the Earth's biological capacity
The footprint of the average African or Asian consumer was less than 1.4 hectare per person in 1999

Marine species are also in dire straits - with an average decline of 35 per cent in 217 species, while forest species populations have shown a 15 per cent decline in 282 species in 30 years