Polar bears in Arctic are suffering due to industrial chemicals 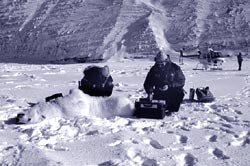 polar bears in the Arctic are suffering due to industrial chemicals swept in the region from nations thousands of kilometres away, as per a report by the World Wide Fund for Nature (wwf). An estimated 22,000 polar bears live in the Arctic. They also face threats from other factors like global warming and loss of habitat.

wwf has called for a wider ban on the toxic chemicals, including some belonging to the newer generation, which are said to be less harmful than the "dirty dozen" outlawed by a 2001 convention of the United Nations. "Three new scientific studies published recently provide strong indications that polar bears are mainly affected by pcbs (polychlorinated biphenyls) and pesticides," wwf stated in a report. pcbs and some pesticides can linger for years in the environment and build up in animals' fatty tissues. Recent studies have shown that the newly introduced chemicals, including some types of flame retardants, have similar characteristics.

The wwf studies indicate that polar bears of Canada and Norwegian island of Svalbard having high levels of pcbs and pesticides suffer as they lack antibodies in their blood. This also makes them more susceptible to infection. The studies even found altered hormone levels that could lead to everything from reproductive to behavioural problems. "This shows that the bears have not evolved mechanisms to deal with the chemicals," says Andrew Derocher, a scientist at the University of Alberta, usa.