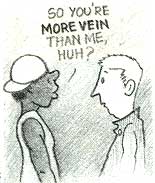 Scientists have now been able to reason why black Americans suffer higher rates of hypertension, heart disease and stroke than their white counterparts. The new findings of Randall Tackett and his team at the University of Georgia in the US reveal that Afro-Americans may have less flexible veins (Science, Vol 265, No 5169).

The scientists collected pieces of saphenous vein -- found in the leg and used for coronary bypass surgery -- from both blacks and whites and studied their ability to contract and dilate in response to various drugs. The new finding may to lead to more effective therapies for suffering black Americans.