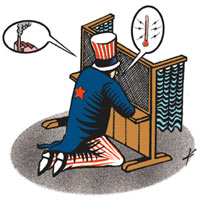 It is for the first time that the Bush administration has linked an increase in global warming to human activities in the us. The Climate Action Report 2002 of the us government says, "Greenhouse gases are accumulating in Earth's atmosphere as a result of human activities, causing global mean surface air temperature and subsurface ocean temperature to rise." In the past, the Bush administration had said scientific evidence was not clear on whether the increasing temperature was due to human activities. The us is the biggest emitter of greenhouse gases, (about 20 per cent) -- mainly from the burning of coal, oil and gas in factories and power plants (see: A forceful endorsement,). However, the report gives priority to the us economy over the environment. The document states: "We seek an environmentally sound approach that will not harm the us economy. We believe that economic development is key to protecting the global environment. In the real world, no one will forego meeting basic family needs to protect the global commons." The report emphasises on a us response to global warming that relies on a voluntary approach to reducing emissions by polluters. At the same time, the document forecasts a 43 per cent increase in us greenhouse gas emissions by 2020 even after carbon sequestration is accounted for.