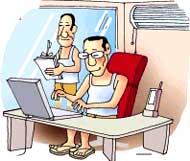 Japan has pitted fashion lovers and conservationists in a rare battle. A current energy conservation drive urges government servants and politicians to dress casually, sans neckties and suits, from June 1, 2005 to September 30, 2005. The idea is if people feel the heat less, air conditioner thermostats can be set higher to save energy.

Japan's prime minister Junichiro Koizumi, whose hairstyle and casual dressing have been disapproved by many fashion puritans, said in support of the drive: "As long as you don't offend people, anything is fine...It doesn't have to be a special shirt, it can be the type you wear with a tie." But fashion pundits are aghast. "The shirts people wear to the office are designed for being worn with a tie. If you just leave off the tie and jacket, you have an aesthetic problem," Shinro Hayashi, editor of the country's famous men's fashion magazine Men's Club was quoted by the media as saying.