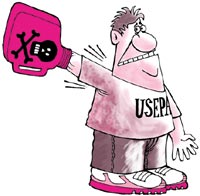 the United States Environmental Protection Agency (epa) has been hauled to court for allegedly trying to weaken the rules that protect endangered species against pesticides. Conservation and pesticide watchdog groups filed a lawsuit against the agency on January 15. The activists contend that epa is acting on the advice of an industry body, a procedure which contravenes the Federal Advisory Committee Act.

The Federal Insecticide, Fungicide and Rodenticide Act Endangered Species Task Force (festf) -- a group of 14 agro-chemical corporations -- has been established and used by the epa to develop a database on the location of endangered species. But the Federal Advisory Committee Act states that the epa should instead constitute and consult a central committee on policy matters relating to pesticides and endangered species.

According to the conservation groups, the festf has recommended that the safeguards for shielding endangered species from pesticides be diluted. "Such advocacy behind closed doors, in the absence of all stakeholders, is illegal and must stop,'' asserts Aimee Code of Northwest Coalition for Alternatives to Pesticides, in defence of the lawsuit. Patti Goldman of Earthjustice, one of the attorneys who filed the complaint, says the legal recourse was necessitated because the epa had already drawn out a proposal that weakened the rules.

This plan seeks the removal of wildlife agencies, including the Fish and Wildlife Service and National Marine Fisheries Service, from the process of assessing the risk of pesticides to endangered species. Such a step would remove a necessary check on the epa, feel the activist bodies.

The lawsuit also charges the epa with adopting outdated methods of risk calculation. It points out that the agency assesses the effect of a single pesticide on a crop, but not the combined impact of numerous pesticides on it or the cumulative effect of multiple applications of the same pesticide in an area. It says the epa also lacks credible methods for studying the migration of pesticides to urban environments.

Goldman believes that the case can have any of the following outcomes: ending epa's use of the festf as a preferred source of advice; establishing the use of festf as per law (giving public notice of meetings, holding open meetings, making records accessible and ensuring a balanced membership when addressing policy matters); or outlining the limits for industry task forces that enter into special relationships with the epa for data generation. This would ensure that they do not assume the role of advisors. The epa officials were unavailable for comment on the issue.