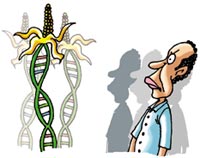 The genetically modified (gm) food aid issue is snowballing into a major controversy across the continent. More than 60 groups -- representing farmers, consumers as well as environmental and development organisations -- from 15 African countries have sent an open letter of protest to the World Food Programme (wfp) regarding the matter. These bodies are protesting against the pressure exerted by the wfp and usaid on Sudan and Angola over their respective decisions to impose restrictions on gm food aid.

While Sudan wants food aid to be certified " gm free", Angola has made it clear that it will accept transgenic food aid only if the whole gm grain is first milled. Despite the Sudanese government having put in place an interim waiver on the gm food restriction, usaid cut off food aid to the country. In the other case, the wfp told the Angola that it would face a significant decrease in the provision of food if it continued to insist on its pre-condition.

These countries would do well to emulate Zambia, which banned gm food aid. Not only has it managed to cope with the crisis, it has begun exporting non- gm food to its neighbours.