A deadly cyclone causes large-scale devastation in Orissa. Authorities fail on all counts 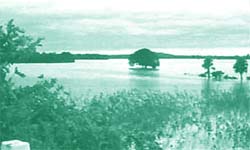 not since 1942 has Orissa witnessed a cyclone of this magnitude. On October 18, a devastating cyclone ripped through one of the state's largest cities, Berhampur in Ganjam district, and adjoining districts leaving a trail of destruction. At the last count around 100 people, including many children, had died and thousands injured.

An estimated five lakh people have been affected in 460 villages in Ganjam district alone. The cyclone, with windspeeds of around 200 km per hour had uprooted trees, twisted electrical poles, brought down houses and blown away tinned roofs. Newspaper reports say that the city skyline had changed overnight: not a single tree remains so much so that the distant mountains are now visible. "It has been an unmitigated disaster," said chief minister Giridhar Gamang after visiting the worst-hit areas.

And even days later, Berhampur was yet to recover from the natural disaster -- the town was still without electricity and water supply. Government officials said that they had started digging tube wells in rural areas and cleansing the existing wells and ponds. A total of 20 water tankers have been pressed into service to provide drinking water to the people of Berhampur. Some 18 mobile vans are selling essential items in Ganjam district.

In the adjoining region, thousands of hectares of crops are now under water. But many people say that the relief has been too little and too late. They also blame the authorities of not warning them about the disaster.

The city, however, is slowly limping back to normal. But for many families, life will never be the same again. Prateek Kumar, a resident of Berhampur, woke up only to find that three of his children had died after the roof of the room where they slept had collapsed. A mother of two, Gurbari Dehuria in Ganjam district will also carry scars for the rest of her life. Both her children died in their sleep when a wall collapsed.

Meanwhile, a two-member team comprising Union ministers -- tribal affairs minister Juel Oram and minister of state for surface transport Debendra Pradhan -- which surveyed the affected areas said that the estimated loss is around Rs 500 crore. The chief minister has announced an ex-gratia payment of Rs 25,000 each to the next of kin of those dead and Rs 5,000 each to those injured. He has also announced Rs 10,000 each to those families whose houses have been destroyed and Rs 5,000 to those that are partially damaged.

According to the meteorological department officials in the state, the cyclone was not altogether unexpected during this part of the year. The post-monsoon season of October and November routinely witnesses such storms at least twice a month. More often than not, they head towards Bangladesh. This time, however, Orissa fell on its path and even the gods were not spared. Many statues of deities in Berhampur were so badly battered that the ritualistic immersion of the idols was no longer required.

Fortunately, as the cyclone surged deeper into the mainland crossing over Chilika and Bhubaneshwar and then on to West Bengal, it lost much of its ferocity and died down. But by then, it had already shown how pitifully inadequate the disaster prediction in the country actually is.