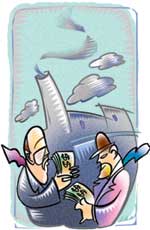 power utility companies in eu could now earn 1 billion in profits from the eu Carbon Emissions Trading Scheme without doing much to reduce carbon emissions. The windfall could come because of increases in electricity prices brought about by the scheme without needing to make any extra investment -- the precondition to actual effective carbon trading.

"The unwarranted profits arise out of the fact that the companies have been given, free-of-charge carbon emissions permits, on which the scheme is based," claims Peter Bedson, from ipa Consulting, a uk -based consultancy firm. This, he explained to the media, is like the government giving free money to energy firms.

Other international environmental groups like wwf have labelled it a scandal and demanded that the money be taxed and redirected into energy conservation. They claim that a member of the uk parliament had warned the department of trade and industry about the possibility of such a fraud.

The loopholes can be traced to the design of the eu emissions trading scheme, which works by governments setting a limit for the total amount of carbon that its heavy industries and power sectors can emit. The governments give the companies free pollution allowances up to a certain level and if they pollute beyond that limit, the companies need to buy more permits from those who have installed better technologies and saved their credits.

The undue profits are generated because the government, instead of auctioning the certificates, has distributed them free to the corporations. And when power generators use high-carbon fuels like coal, they end up buying extra carbon permits, consequently raising the overall electricity prices and benefiting those who used low-carbon fuels like