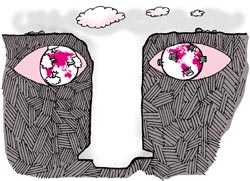 do polluted waters affect the livelihood of fisherfolk? Are farmers devastated when their land degrades? The answer, quite obviously, is yes. But scientific evidence that can confirm such linkages and impel governments to act is extremely weak. This was finally admitted by 195 of the world's top scientists and policymakers when they convened in Nairobi from January 14-15, 2004.

They had gathered under the auspices of the world's apex environment body -- the United Nations Environment Programme (unep) -- to discuss how the organisation's scientific base could be strengthened. The aim was to identify the 'needs and gaps' in environment-related scientific assessments, and evaluate options available to overcome the shortcomings. "Most governments felt the main gaps were in the science of linkages between poverty-environment, and environment-conflict," says Nick Nuttall, unep's head of media. Weak linkages between environment-trade, environment-development, water-agriculture, land degradation-desertification, and climate change-biodiversity were also cited as grey areas. Gaps in assessing biodiversity loss, societal implications of ecosystem degradation, and chemical hazards were said to be the biggest challenges facing the scientific community.
Identifying these shortfalls was easy. The challenge was to identify the steps that should be taken to overcome them. On such matters, ironically, there was very little consensus. "Substantive discussions took place only on very few issues, one of them being the proposal to establish an intergovernmental panel on environmental change," reveal sources from India's Union ministry of environment and forests (moef).

The idea of setting up such a panel was first mooted in February 2002 during a meet of the Governing Council -- unep's highest decision-making body. But during the council's last meeting, held in February 2003, many of its members did not favour the panel's constitution. Even at the Nairobi consultations, the idea did not fly high, despite the panel having the potential to consolidate the huge cluster of multilateral environmental treaties, which at present work in an uncoordinated manner. All unep members, except for the representatives of the European Union (eu), felt the idea is 'too premature'. "The us opposed it, as it was not clear as to what role such a body would play. More importantly, it felt that such a panel would 'politicise' scientific assessments," say the moef sources, adding: "Even India feels that it is better to strengthen unep's current activities than create a new body."

Developing nations like India are unable to move up the environmental ladder because they are confronted with more pressing problems of poverty and healthcare. Moreover, their weaker regulations (relative to the developed countries, particularly those of the eu) gives their polluting industries a cost advantage that they are reluctant to let go of.

But from the outset of the meeting, it was clear that Europe's ambitious plans would never materialise. The delegates, however, did agree on one thing: strengthening the global environment outlook (geo) process, a participatory and consultative process of assessing the world's environment involving regional centres, un agencies and specialised institutions. The delegates decided to strengthen the scientific credibility of the geo by increasing linkages with other assessments and the international scientific community. They also agreed to improve the quantity, quality and accessibility of environmental data.

However, even this, or any other step aimed at improving the scientific assessments, would require an additional commitment of financial resources. Ironically, this issue was not discussed.

It is clear from the outcome of the meeting that such 'gala events' can never improve the lives of the masses. Therefore, for a better world, the world's policymakers must work at grassroots levels to solve the problems, which they have acknowledged during the meet.