Getting scientists from developing countries to serve on the climate change panel is proving difficult. 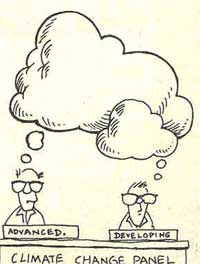 AT THE Intergovernmental Panel on Climate Change meeting in Harare in November, efforts were made to reorganise its bureauto ensure sgientists from the developing world are better represented. But IPCC secretary N Sundararaman said finding scientists from developing countries was difficult and some governments were reluctant to allow scientists to serve on what is essentially an intergovernmental panel.

Several representatives in the new bureau are from OPEC countries. Sundararaman said much to the dismay of several people, Saudi Arabia pushed for their representative to be nominated vice-chairperson of the bureau and ironically, the Asia representative selected was from Kuwait. The panel's work has been redefined to establish a better basis for future assessments of climate change. Three working groups have been set up - to deal with the science of climate change, to assess the impact of climate change and responses and to look at economic issues relating to climate change.