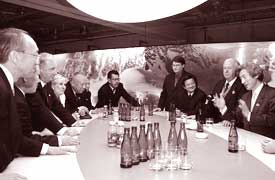 countries representing 60 per cent of the world's gross domestic product re-iterated their commitment to free trade and agreed on a set of "best practices" for bilateral trade agreements at the 12th Annual Asia-Pacific Economic Cooperation Forum (apec). The meeting , held in Santiago, Chile, from November 17-21, 2004, witnessed stiff opposition from over a hundred civil society organisations. The Chilean Social Forum led a force of more than 25,000 to protest apec's policies. It also held its annual meeting to discuss the impacts of globalisation, of which apec is a major symbol. But apec members were not moved by the criticisms.

apec focuses on trade between 21 Asia-Pacific countries. The latest apec commitment, dubbed the "Santiago Initiative for Free Trade", is in line with its 1994 pledge to achieve a free trade area between its industrialised members by 2010, and with all its members by 2020. However, the apec Business Advisory Council, a group of business leaders, said the growing number of free and regional trading agreements might lead to a "spaghetti bowl of overlapping preferential trade agreements with inconsistent provisions" that might negatively affect trade.

apec leaders also agreed to " apec Best Practices for Regional and Free Trade Agreements". These comprise guidelines like rules of origin to determine if a particular product can be covered by such agreements and provisions for the expansion of the free trade area.