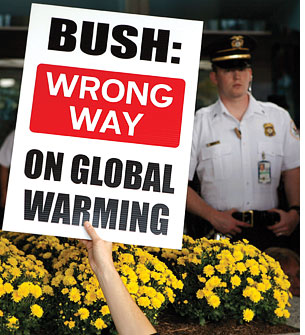 december 14, Bali, Indonesia: a much anticipated un meet concludes. The meet was expected to work out a consensus to deal with climate change once the Kyoto Protocol expires. It did come out with an action plan to give direction to a series of meetings over the next two years. And it's expected that these meetings will finalize the post-Kyoto agreement. There are, however, no binding targets on developed countries to cut their greenhouse gas emissions.

The Kyoto Protocol expires in 2012. But there must be an agreement in place by 2009 to deal with the post-Kyoto scenario. Binding targets for developed countries is one issue that threatens to stall such an agreement. And it was the most contentious matter at the 12-day Bali meet that began on December 3. Organized by the un F ramework Convention on Climate Change (unfccc), the meet saw a cabal of developed countries, led by the us, objecting to a sentence in the draft plan that called on "Parties included in the Annex I to the Convention [developed countries] to reduce emissions in a range of 25-40 per cent below 1990 levels by 2020".

The Intergovernmental Panel on Climate Change's (ipcc's ) fourth assessment report had, earlier this year, recommended these targets to stabilize greenhouse gases in the atmosphere. The targets were also approved by an ad hoc working group of a climate change meet held in late August in Vienna, Austria. The meet intended to set the agenda for Bali (See 'Change in the air', Down To Earth, September 30, 2007).

The European Union and developing countries supported the targets in Bali. But they were stalled by the us, Canada, Japan and the Russian Federation. us chief negotiator Harlan Watson said that the numbers were based on "many uncertainties" and a small number of scientific studies by the ipcc. After a debate that went on for seven days, the emission cuts specifications were moved to a footnote. The sentence in the draft text requiring binding cuts was modified. It finally read: "Deep cuts in global emissions will be required to achieve the ultimate objective of the Convention and emphasizing the urgency to address climate change as indicated in the Fourth Assessment Report of the Intergovernmental Panel on Climate Change."

The reference to developed countries was removed. "This weakening of the text is deplorable," said Martin Hiller of the wwf's Global Climate Change Programme. "However we are encouraged by the fact that the 25-40 per cent cuts recommended by ipcc remain included in the so-called Kyoto track, the part of the negotiations for countries that have ratified the Kyoto Protocol," he added

After an adjournment, the session reconvened with the eu and several developing countries coming out in support of India's proposal. The us eventually accepted the proposed text, and the action plan was adopted by consensus. Rachmat Witoelar, unfccc president, was obviously relieved. "We have a roadmap now," he said bringing the negotiations to a close.

But many were disappointed. In a press release after the conference, Greenpeace said that even though the us had joined the consensus, its intransigence had robbed the meet of significant gains. Stephanie Long, Climate Coordinator of the Friends of the Earth International, was not sure if the Bali roadmap would offer any guidance.

unfccc claimed that an adaptation fund reactivated at Bali will bolster the defence of poor countries that lack the money, technology and human resources to cope with climate changes (see box: Too little too late ). "Perhaps in as little as a year, real resources for adaptation can begin to flow to developing countries and the unfccc is willing to assist developing countries prepare their national adaptation strategies,'' said Yvo de Boer, executive secretary of unfccc. According to de Boer, the fund is intended to finance a variety of climate change projects. These include erecting sea walls to guard against expanding oceans, early warning systems for extreme events, improved water supplies for drought areas, training in new agricultural techniques and the conservation and restoration of mangroves to protect people from storms.

The fund is to be initially administered by the Global Environment Facility, which donor governments established 16 years ago to fund conservation projects. The World Bank is to act as its trustee, and a 16-member board, drawn from rich and poor nations from the Conference of Parties to the Kyoto Protocol, will oversee it.

Funding will come from a 2 per cent levy on revenues generated by the clean development mechanism. When asked if the funds would suffice adaptation projects in developing countries, Kapil Sibal, union minister of science and technology and earth sciences, who led the Indian delegation at the conference, said the funds were definitely not enough. He, however, added, "In the next two years we hope to increase this [adaptation fund] amount, and at the same time get additional funding through other processes."

Long of Friends of the Earth summed the summit's outcome: "We have a long way to go to reach a post-Kyoto agreement by 2009)."