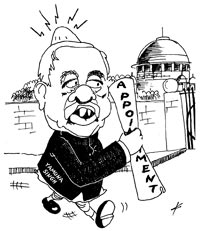 when the Jharkhand High Court (hc) asked state pollution control board chairperson Balmukund Nath Shahdeo to assist it during the hearing of a pollution case relating to an industrial unit near Dhanbad, the official was blissfully ignorant of the matter.

This prompted the hc to delve into his antecedents. Shahdeo's appointment came under scrutiny when it was found that he was merely a matriculate. A division bench comprising Chief Justice V K Gupta and Justice V Narayan questioned the validity of a 'highly technical post' being held by a simple matriculate and quashed his appointment.

The bench concluded that Shahdeo's five-page bio-data was nothing but self-aggrandisement. "There is not an iota of supporting material from any organisation worth the name in the bio-data. It is just like someone printing his visiting card and including in it a long list of achievements," the court ruled.

In its 29-page judgement, the bench reprimanded state forest minister Yamuna Singh and forest secretary Neelam Nath for the appointment of Shahdeo. The court observed that section four of the Water (Prevention & Control of Pollution) Act, 1974, states that a person should have special knowledge or practical experience or both to be eligible to administer institutions dealing with environmental protection matters.

The court directed the state government to constitute a panel comprising senior bureaucrats, technocrats and experts to select a suitable person for the post within three months. In the interregnum, the charge of chairperson would be entrusted to a serving government official.

While the forest secretary has been transferred as an immediate face-saving move, bureaucrats and top forest officials are busy preparing a list of qualified and experienced persons for the vacant post.

Singh, however, questions the validity of the verdict and is planning to move the Supreme Court against the order. The forest minister maintains that the appointment was made in accordance with the relevant laws -- the Union government's Air (Prevention and Control of Pollution) Act of 1981 and Water (Prevention and Control of Pollution) Act, 1974.

Singh justifies the selection of Shahdeo saying, "The law does not state a minimum qualification for the post and hence our decision is correct."