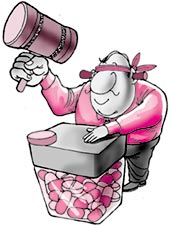 lack of transparency in tender approval procedures -- listed by former central vigilance commissioner N Vittal as one of the five "root causes of corruption" in government departments -- is crippling healthcare services, particularly the availability of drugs. The latest casualty is the Union ministry of health and family welfare's (mohfw) vitamin a supplement programme for 2003, in which procurement problems are said to have deprived children of the nutrient. Even more disturbing are instances of pharmaceutical companies cutting costs to win government tenders by compromising product quality.

S Sarkar, director, children's health programme, mohfw, tries to explain away the vitamin a controversy. He claims that existing stocks of the supplement were utilised to offset the shortage caused due to the tendering mechanism. But experts maintain that no vitamins were provided to the target group. A drug company has also alleged that government officials favoured its competitor, overlooking price considerations.

The tender for the vitamin was floated in February by public sector undertaking Hindustan Latex Limited and granted to Delhi-based Nestor Pharmaceuticals. Rival bidder Nicholas Piramal India Limited of Delhi contends it has evidence to prove that the price quoted by it was lower than Nestor's. "We brought this to the concerned officials' notice, yet our offer was ignored," points out Rohit Kumar, general manager, corporate relations, Nicholas Piramal. The company is preparing to move the court. Both Nestor and Hindustan Latex Limited refused to comment on the issue.

Sadly, this is not an isolated case. Vadodara-based Bharat Parenterals Limited, too, lost out in a similar manner while trying to bag contracts for paracetamol, methylergometrine maleate and mebendazole. "The tender process involves huge amounts of money. We will have to take the legal recourse to seek redress," asserts Pankaj Shah, liaison officer, Bharat Parenterals.

It may be noted that the primary responsibility for purchasing drugs on behalf of government hospitals and dispensaries all over the country lies with the Medical Stores Organisation (mso), which comes under the Directorate General of Health Services. But since mso has become nearly defunct now, smaller agencies such as Hindustan Latex Limited and Hospital Services Consultation Services Corporation (India) Limited perform its functions.

The Comptroller and Auditor General has criticised the system. It is an open secret that government officials expect pecuniary benefits in return for clearing bids. A section of the industry prefers to provide such illegal gratification for getting orders, instead of investing amply in the product. Consequently, these companies end up supplying inferior medicines to the government's procurement agencies. A case in point is that of Nestor, whose licence was cancelled in 1999 for producing a substandard drug.

Significantly, such low-grade medicines go largely undetected. "The active ingredient in the drug may meet the prescribed limit, but things like binding agents are important for it to be effective," says B D Miglani, ex-principal, College of Pharmacy, University of Delhi. Manufacturers scrimp on such details because there are no tests for them, he adds.

That studies on substandard and spurious drugs do not include medicines used in government hospitals and dispensaries also prevents detection. For his part, drug controller general Ashwini Kumar stresses that the medicines are of "acceptable quality". He, however, adds: "It is the responsibility of the procuring agency to test the drugs." But the government's testing facilities are grossly inadequate. mso has just three laboratories for the purpose. No response could be elicited on the subject from director general of health services S P Agarwal.

Experts are of the view that safeguards can be erected to ensure adherence to standards. Shah suggests fixing of a minimum rate for drugs. Buying agencies should inspect the companies' plants themselves rather than depending on the drug controller, says a consultant. "It would help if the procurement system is streamlined to increase transparency," avers Delhi's ex-health minister Harsh Vardhan. He believes vested interests are hindering the process.

In September, the World Health Organization (who) put forward a plan envisaging pooled procurement for the South East Asia region. Under this, individual governments would be answerable to a committee which would have representation from all countries. According to who, not only would this help in reducing medicine prices, it will also ensure quality control. In spite of the proposal's accent on the authenticity of the product and the industry's endorsement, the Indian authorities were lukewarm towards it. Seen in context of the government's pondering the death penalty for fake drug makers, this stand appears inexplicable.