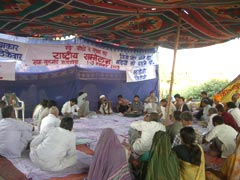 on november 3, oustees and activists from 12 states resolved to tackle issues facing dam-affected people. They took note of the Union government's river networking project that would require construction of several new dams in addition to the existing 150 proposals, and decided that they will staunchly oppose any fresh move to displace local inhabitants.

The pledge marked the culmination of a meeting that got underway on November 1 at Sulgaon village in Madhya Pradesh's (mp) Khargaon district. The venue was aptly chosen because it was here that local residents stopped the construction of Maheswar dam on Narmada river three years ago. Participants also came from other states including Assam, Bihar, Chhattisgarh, Delhi, Gujarat, Himachal Pradesh, Maharashtra, Manipur, Orissa, Uttaranchal and Jharkhand.

Displaced people from different states narrated their rough experiences. They had either not been rehabilitated at all or not given adequate compensation. It is noteworthy that though there are about 2.5 million oustees in India, hardly 25 per cent have been resettled. Prakash Karnik, an mp farmer whose land was submerged by the Gandhi Sagar dam, described how several affected people were still fighting for their legitimate right 42 years after the dam was built. The structure inundated more than 63,000 hectares of agricultural land and habitation.

It was agreed that the affected people's effort would be supported by six regional chapters. They would document dam-related activities at the regional level as well as monitor all issues pertaining to water. The non-governmental organisation South Asian Network on Dams, Rivers and People (sandrp) will be responsible for the overall coordination. To start with, the regional chapters will soon hold meetings to bring together various groups.

One of the subjects that came up for discussion at the meet was India's failure to implement the report of the World Commission on Dams (wcd). Sripad Dharamadhikary of Manthan Adhyayan Kendra, Badwani, mp, observed: "The Union government has not followed the wcd's recommendations despite the fact that the report was prepared on the basis of negotiations involving all stakeholders." The gathering demanded that the government should constitute an Indian Commission on Dams along the lines of wcd, if it was not serious about the latter's suggestions. The participants raised the issue of community rights over rivers and spoke up against the privatisation of water, too.