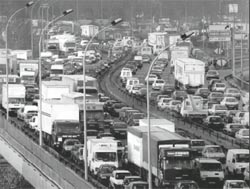 under the aegis of the United Nations, an international agreement was signed by eight countries to develop globally uniform environmental regulations for motor vehicles. The agreement, pending for the past two years, is expected to "harmonise" the world's automobile standards.

According to an announcement made by the United Nations Economic Commission for Europe ( un/ece ), this landmark agreement will help to provide greater uniformity in environmental protection, energy efficiency, vehicle safety and pollution reduction from automobiles for un nations. Current levels of environmental protection and vehicle safety will not be compromised in order to achieve regulatory uniformity, un officials said.

The us Environmental Protection Agency and the us department of transportation spearheaded the development of the agreement whose studies showed that vehicle emissions now account for 75 per cent of the carbon monoxide ( co ), 33 per cent of carbon dioxide ( co 2 ), and 44 per cent of oxides of nitrogen ( no x ) in urban air. The pact hopes to ensure that regulatory activities will be carried out in an open manner and will consider the best available technology, the cost effectiveness of these technologies, as well as the benefits to public health.

New global vehicle regulations are expected to include aspects of existing national and international regulations, including those in an earlier global automotive standards agreement -- un/ece Working Party on the Construction of Vehicles ( wp 29), 1953.

At a meeting of the parties to the agreement in July, 2000, working groups on pollution and energy, noise, passive safety, brakes and running gear, discussed updates to existing standards created in the 1953 agreement.

The implications of such an agreement for a country like India still needs to be assessed by the government. Says K K Gandhi, senior advisor, Society of Indian Automobile Manufacturers: "Although some testing procedures have been discussed and laid out in the agreement, exact standards have not been prescribed as yet." The Indian representative was present at the last meeting of the agreement but India has chosen to act as observer for the time being until more extensive and detailed regulations are laid out. Gandhi, however, is optimistic about the agreement as it could lead to easier export of Indian vehicles since the standards would be the same for all the signatories.

Among the important issues discussed by the pollution and energy panel were procedures for measuring particulate emissions and standards for alternative fueled vehicles like electric and hybrid engine cars. The panel also looked at standards for agricultural and forestry tractors and other large vehicles. The working group on pollution and energy is scheduled to meet again in January 2001, in Geneva, Switzerland. The panel plans to discuss motorcycle emissions, electric vehicles, ways to reduce co 2 emissions, and fuel quality, among other issues.

However, the automobile industry is as usual harping on the fact that benefits from the agreement will have to be supported by equivalent fuel quality. Emilio di Camillo, president of the International Organisation of Motor Vehicle Manufacturers, highlighted the car industry's concerns that the development of uniform motor vehicle regulations may overlook the benefits that could be obtained by updating fuels. "The auto industry is pushing for sulphur free gasoline and diesel, which would make it easier for automakers to meet emissions requirements in the us and around the world," he said.