United they stood, divided they were 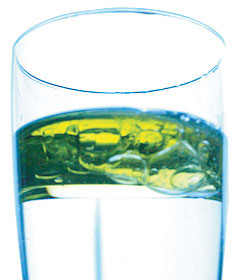 water is difficult because liquid droplets stick to each other. Electrical forces enhanced this property, it was believed. The liquids develop opposite charges, which increases the attractive force between them, bringing them closer. Scientists mixed vinegar with olive oil and found the opposite: the forces repelled. In other words, a strong electrical wave helped separate the two. Petroleum could be purified this way, the scientists said. This research could also be extended to oil spill cleanups