Various theories have attempted to explain the origin and positioning of the earth' continents. A new hypothesis now suggests that there, perhaps, was only one huge continental land mass instead of the two supercontinents thought to exist before 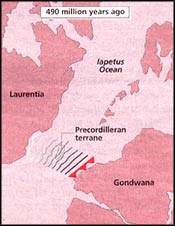 But at the meeting of the Geological Society of America, held recently in New Orleans, us, researchers including Ian Dalziel, from the University of Texas, Austin, suggested otherwise. According to them, a chunk of North America appears in western Argentina, inclicating that Laurentia was not a separate continent. The new theory places North America opposite to the position it occupied earlier. Dalziel, who first proposed the new geography, says that the chunk which was dropped in western South America 500 million years ago, pms down the errant Laurentia continent to within a few thousand km off South America's west coast. The Argentine connection gives a clue to pilaeogeographers about how all the continents could have been either one large landmass, called the Pangea, which formed 250 million years ago in the Permian era or else close enough to appear as one (Science, Vol 270, No 5242).

Partial support was offered to Dalzieps hypothesis by three other speakers at the meeting. According to them, 490 million years ago, Laurentia and South America had been, if not in contact, then close enough to exchange an 800 kni long chunk of plate. William Thomas of the University of Kentucky had in 1991 theorised that 540 million years ago, a block of Laurentian crust had sneaked away from the present Gulf Coast, never to return. 'Ibomas had no idea where it had got away to. This conundrum was later explained in a paper authored by Ricardo Astini of the National University of Cordoba, Argentina. The paper spoke of a crustal block Precordillera, now locked in the Andes, north of Mendoza in far western Argentina, which distinctly contains North American fossils of 540 million years ago. Astim drew further conchtsions from the similarities between rock types and the stratigiaphic (sequence of strata) records in the Precorditlera and the southern us. "They are identical," adds Robert Hatcher of the University of Tennessee.

Fossil records suggest that before Precordillera finally docked in its present position, it spent some time on its own floating around as an island. This indicates that the two continents of South America and Laurentia were not in direct contact, but were 1,000-2,000 km apart. Direct contact would eliminate all doubts about the position of Laurentia, and Dalziel is continuing further studies on the subject. Another hypothesis is that before colliding, Precordillera could have been attached to North America by a submarine plateau, thus not detaching itself from its parent body totally.