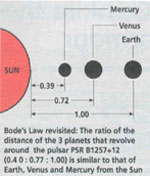 PLANETS in our solar system share a mysterious mathematical relationship. If you take the sequence 0, 3, 6, 12, add 4 to each number and divide by 10, you arrive at a ratio repeated in other systems -- the distances of particular planets from the Sun: distance of Earth from the sun. This cosmic beat, called Bode's Law, holds true as far as the orbit of Uranus; but nobody knew why, and whether it was unique to our solar system.

But the recent discovery of 3 planets orbiting a pulsar known as PSR B1257+12 has revealed a system that remarkably mimics the spatial rhythm of our inner solar system comprising Mercury, Venus and Earth. The mathematical duplication is so striking that it seems that there may a diktat of nature that ensures that planets always stick to certain orbits and have certain sizes.

PSR B1257+12 is a rapidly spinning, pulsating neutron star, slightly heavier than the Sun but more than a million times denser -- its matter is packed into a sphere only 10 km across. Thought to have formed from the remains of a companion star mauled by the pulsar in question, the 3 planets cannot be seen directly, but are revealed by the manner in which they change the period of the pulsar's pulses as they orbit around it.

Tsevi Mazeh and Itzhak Goldman of Tel Aviv University point out that the ratio of the distances of these planets from the pulsar, 1:0.77:0.4, is extremely close to the ratio of the distances of the Earth, Venus and Mercury from the Sun, which is 1:0.72:0.39. That's not all. In both systems, 2 outer planets with roughly the same mass have a much lighter inner companion.

This discovery suggests a universal law governing the creation of planets around stars. Astronomers believe if it works for systems as diverse as a pulsar and our Sun, it may hold true for all stars in the universe.