Computer models mapping the future course of the universe predict its demise; later than sooner! 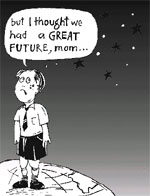 To date, research on the future of the universe has mostly focused on the fallouts of the Big Bang theory of evolution that created the cosmos some 10 billion years ago and not what can happen in the years to come. Adams and Laughlin's research was primarily based on the Big Bang theory, which assumes that the universe progresses towards infinity. The 68-page paper (to be published in the coming April issue of Review of Modern Physics) reflects on the four distinct eras the universe will pass through. The current period is the Stelliferous era, followed in succession by the Degenerate era, the Black Hole era and ultimately the Dark era. Said astronomer Stephen Maran, a spokesperson for the aas, " It looks like the universe will end by fading to black. This looks like a really solid piece of work and is by far the best that has been done in the field ."

In order to make the time-scale more easily comprehensible, the two astrophysicists have developed a new unit of time that they call a Cosmological decade. "Each such decade represents a ten-fold increase in the number of elapsed years. For example, the universe is currently only about 10 cosmological decades or 10 billion years old (10 multiplied by itself 10 times)." The analysis takes us forward to the 200th cosmological decade or 10 multiplied by itself 200 times.
The Stelliferous era, in between which the universe is currently now, is quantified by stars. This bright era will come to an end in about 100 trillion years. "This is when all the stars in the universe including our own sun will run out of gas and burn out. In 10 trillion years, a human eye would observe the universe to be black," noted Adams. The sun, a yellow dwarf, will puff up into a red giant (an evolved star that has expanded in size and undergone a change in its surface temperature so that it appears red) in a few billion years and then collapse into a white dwarf (a collapsing star that finally exhausts its sources of fuel for thermonuclear fusion) no bigger than earth. What could then happen with respect to the sun are two probabilities according to astronomists: the sun could either char the earth into cinders or else the earth could careen into it and get destroyed. Either way, humanity should find alternate areas to inhabit, feel the researchers.

According to the analysis, common stars like red dwarfs will not turn into red giants and will instead hoard their energy. But eventually, even red dwarfs will shrivel and die. It is then that the universe will move into what is called the Degenerate era. This period will witness the cosmos mass as a heap of failed, dead and collapsed stars that do not shine. These include white dwarfs , brown dwarfs (objects that are between planets and stars), neutron stars (stars that have collapsed under gravity to such an extent that it consists almost entirely of neutrons) and black holes. Such will be the dimness that a planet revolving around a white dwarf, "it will be like orbiting a dim light bulb", states Adams.

Around this time, galaxies will begin to fall apart. At the end of this era, the duo predict that the most dramatic transformation will take place to result in the beginning of the Black era. Elementary particles known as protons, which live at the heart of every atom, will begin to decay. And this proton decay, "will be the death-knell of carbon-based life", since without protons there can be no carbon, observed Laughlin. Black holes and dense collapsed stars will get bigger as they devour matter. Even these will finally evaporate and all that would be left will be a diffuse sea of electrons, positrons and neutrinos spread across space. This constitutes the Dark era.