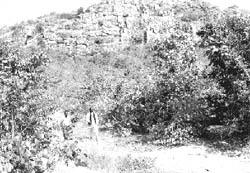 devil in disguise -- this is how environmentalists describe an amendment to the Orissa Forest Act, 1972. The amendment not only gives forest officials absolute powers, but also absolves them from any judicial intervention. "No lawsuit, prosecution or other legal proceedings shall be ordered against any forest officer for anything done or omitted in good faith under this act or orders made there under," the amendment states. According to Basant Kumar Mishra, the state's principal chief conservator of forests, officers of Karnataka have been empowered in a similar manner. The amendment was recently approved by the state legislative assembly and is now with the governor for his consent. Officials claim that the amendment aims to check indiscriminate deforestation and encroachment of forestlands. "The prime objective of the amendment is to empower forest officials in such a manner that they use their arms without any restriction," said Mishra.

Experts feel that given the high incidence of corruption among the forest department officials, such powers would lead to gross abuse. Refuting this argument, B K Pattnaik, special forest secretary, said that the powers would help the forest officials crack down on the mafia. He, however, did not rule out the possibility of the abuse of power in certain individual cases. But such an attitude fails to pacify the environmentalists. "The amendment primarily targets the communities," says Udayanath Mohanty, convenor of the Orissa Jungle Suraksha Manch, a state level forum of forest protecting committees. "The timber mafia which normally works in close connivance with the forest department will operate as usual. The absolute power with the officials would be an extra safety jacket for them. This amendment is silent when it comes to reprimanding the timber mafia," rues Mohanty.

"In Orissa, where there are thousands forest protection groups, people have a lot at stake in protecting and managing forests. Any changes in the legal framework should be done in consultation with them. Any changes in the law or rules should also empower communities to effectively protect and manage forest," says Manoj Pattnaik of the Regional Centre for Development Cooperation, a Bhubaneshwar-based ngo.

"For the last 3-4 years we have been told that the government is trying to introduce legal sanction for the joint forest management ( jfm ) programme. But there is no mention of jfm in the amendment, " adds Manoj Pattnaik . B K Pattnaik says that separate amendments had to be introduced to legalise jfm. W hy was this not possible with the present amendment is still a mystery among the environmental circles.