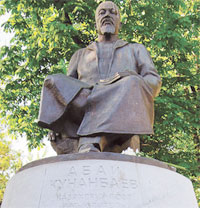 A 19th century Kazakh poet who was previously all but unknown in Russia has become an unlikely figurehead of opposition protests marring Vladimir Putin’s return to the Kremlin.

Arrested in droves or moved on by riot police for promenading along Moscow’s boulevards and singing songs, the protesters camped out in front of a statue dedicated to Abai. Turned out the 19th century poet wrote about free elections and human rights.

But protester Timur Khorev says they knew nothing about Abai. After initial confusion, protesters were delighted to find out that the father of written Kazakh literature was also a champion of free thinking.

There is also some irony here. Putin had erected the statue of Abai in 2006 to reciprocate Kazakh President Nursultan Nazarbaev’s erecting a statue of Alexander Pushkin.