Leather standards exist for export only 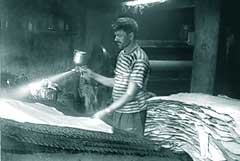 Over the last two decades, the leather industry has seen a movement away from traditional methods, including the use of organic compounds, to a greater dependence on chemicals from inorganic sources. Mostly done to reduce time of tanning and improve quality, these changes have a health price for users.

Leather nowadays is treated with at least 20 to 40 chemicals in different compositions during its tanning process. These include pentachloro phenol (pcp), chromium 6 and azo dyes, all carcinogenic chemicals, especially harmful to the skin. In fact, in the early 1990s, European nations had banned Indian leather that had these chemicals. Today, however, Germany is one of the biggest importers of Indian leather.

This is because this leather goes out only after special certification to confirm the absence of banned chemicals. This means investing in better chemicals, that are imported from Italy and the uk. Only a small part of this spills over to the local Indian market.

P Saravanan, senior scientist, Central Leather Research Institute, Chennai disclosed that leather used within the country was not tested. The hazardous substances management division, Union ministry of environment and forests, also admitted that while they were aware of the harmful effects of these chemicals, no laws were in place to make testing domestic leather compulsory. Nor was this scenario likely to change in the future.

Industry is negligent and the government apathetic. But even consumers in India seem unconcerned with issues of chemical use in leather. Partly, this is because most of them, unlike consumers in the West, are unaware of the extremely harmful chemicals used in tanning leather -- as confirmed by consumer forum Voluntary Organisation in Consumer Education, New Delhi.

Down To Earth also found that consumers left it to retailers to check chemicals used in leather. But the retailers seem as unaware of the dangers and make no efforts to check the type of chemicals used. For them, product quality (gets better with harsher chemicals) is the only benchmark.

Darshan Tyagi, owner of a leather showroom in Chennai's popular Spencer Plaza, has never checked certification on products in his shop. As he points out, "Our consumers don't ask us for any proof, so we have never had to look at the certification". Retailers feel that the onus of ensuring safe leather is on manufacturers. Says Tyagi, "It is better for chemical testing to be conducted at the manufacturing stage itself. It is very difficult to conduct any tests once the product is finished and sold."