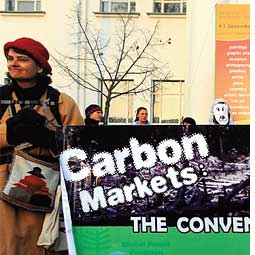 On January 28, the European Commission released its proposals for a global climate agreement. The commission has asked developing countries like India and China to take on commitments to reduce their greenhouse gas emissions by 15-30 per cent below business-as-usual levels by 2020. This is the first time Europe has made such a demand. India has responded saying the proposals are in contravention to the United Nations Framework Convention on Climate Change. Other international groups too have criticized the proposals on various counts saying that Europe's emission reductions targets are inadequate.

The proposals indicate Europe's negotiation strategy for the climate conference in Copenhagen later this year. In December, heads of governments will meet in the Danish capital to decide on a global climate deal that will come into effect after 2012--the year the first phase of the Kyoto Protocol ends. The deal has to be agreed upon this year so that countries get enough time, till 2012 end, to ratify it.

Close on the heels of the announcement a European delegation visited New Delhi in February and met Indian ministers and officials. The delegation, which included deputy prime minister and minister for environment of the Czech Republic, Martin Bursik and director general of environment, Euro pean Commission Karl Falkenberg, presented the commission's proposals. Namo Narain Meena, minister of state for environment, and Vilas Muttemwar, minister for new and renewable energy, asserted that India's priority was economic growth and poverty alleviation and that the country wouldn't accept a numerical reduction target. But Europe has taken an aggressive stand and is linking all further dialogue including that on financing and technology transfer to India taking reduction commitments. "It is give and take," Falkenberg told Down To Earth.


The EU has set a goal to limit global warming to within 2C of pre-industrial temperature. This is based on the evidence that climate change would reach dangerous proportion beyond that limit. To achieve the goal, global emissions must peak before 2020 and drop to less than 50 per cent of 1990 levels by 2020. All countries, the EU said, must be part of this mitigation effort. Developed countries should cut their collective emissions by an average of 30 per cent below 1990 levels by 2020.

EC argued that "emerging" developing economies' increasing emissions would negate the emissions reductions by developed nations. The commission has asked for developing countries, except the least developed countries (ldcs), to limit the rise in their collective emissions to 15-30 per cent below business as usual by 2020. This target should include efforts to halve emissions from tropical deforestation by 2020 and stop the loss of global forest cover by 2030.

The EU stand contradicts that of the G77 and China, a major group of developing countries, that have demanded that the global climate deal impose deeper emission cuts on the developed world. "We are asking the EU to reduce its emissions domestically by 40 per cent by 2020 with no space for offsetting. Developing countries should also curb their emissions without restricting their right to development but we do not think that developing countries should have binding emission targets as long as Annex I countries do not reduce their emissions first. They should put adequate finances on the table to support developing countries to mitigate and adapt to climate change," said Esther Bollendorff, climate campaigner for Friends of the Earth, Europe. "Europe continues to fail to live up to its historical obligations for causing climate change and jeopardizes chances of a satisfactory solution to the climate crisis," Bollendorff added. Most nations within the EU have failed to meet their individual Kyoto reduction targets.

"By 2016, our 'national' strategies will no longer be nationally formulated...the developed countries will have a major say in our developmental planning. The next step will be taken in 2016, after which we will have to negotiate in the UN climate change forum how we allocate our domestic resources between our national development priorities and global climate change concerns...Our National Action Plan, reflecting basic features of our development plans, would be subject to an intrusive review..." India said in its response (see box). And this when India has one of the lowest per capita emissions and no historical responsibility. The proposals have also asked for curtailment of kinds of projects that can come up under the clean development mechanism (cdm), a carbon trading system, in major developing countries.

According to the EC, project-based cdm should be phased out. In its place, the EC suggests a move to sectoral carbon market mechanism. Under this, emissions from major emitting sectors such as power and steel would be assigned quotas on how much they can emit. Such mechanism often involves change in technology in that particular sector. Newer and efficient technologies are held under intellectual property rights by companies in industrialized nations. India has, in the past, said it was inappropriate to prescribe technologies as it could lead to the formation of cartels and stifling innovation.

The proposal further adds that the sectoral carbon market mechanism would lead to deployment of low-carbon technologies and the development of cap and trade systems in the major developing countries. In other words making them take obligatory cuts in their emissions.


To reduce global emissions additional finances of more than US$ 200 billion would be required to be invested worldwide. Oxfam, a non-profit, said the EU plan failed to specify how much money the EU and other rich countries would make available. "Unless developing countries see hard cash on the table, there is a danger they will walk away. It seems the EC is pandering to member states' expected opposition to put money on the table, fuelled by their worries about the impact of the recession," said Elise Ford, head of Oxfam International's EU office. "Earlier versions of the EU proposal contained suggestions to spend US$ 38 billion a year in developing countries by 2020 but this was taken out," said Tom Sharman, head of climate change at ActionAid.

With inputs from Mario D'Souza