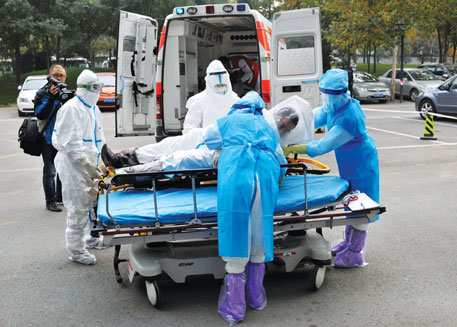 The spread of the Ebola virus has raised several questions about the preparedness of the world to deal with emerging infectious diseases. The dreaded virus, which was first reported in 1976, bleeds 50 per cent of its victims to death. Yet clinical trials of potential drugs have never been done because the disease remained restricted to Africa. Though the current outbreak began in December 2013, Ebola came in the limelight only after it spread to developed countries like the US and Spain.

“This epidemic is surprising only in its scope. In many ways this is an example of the paradigm on emergence (the transfer of the disease from animals to humans and its rapid spread) that epidemiologists have been talking about for years,” says David Fisman, professor at the Division of Epidemiology, University of Toronto, Canada. “Despite all our technological wonders, in many ways infectious disease epidemics remain a threat to lives, economies, and nations much as they were 150 years ago,” he says.

According to figures released by the World Health Organization (WHO) on November 2, over 13,000 people have been infected and 4,818 killed in the “West Africa outbreak” that has spread to eight countries—Guinea, Liberia, Sierra Leone, Nigeria, Senegal, Mali, Spain and the US. An unrelated outbreak of Ebola through a different viral strain in theDemocratic Republic of Congo has infected 66 and killed 49.

A WHO study suggests that in Guinea, where the current outbreak started, the situation is becoming worse. To assess the impact of the disease, WHO’s Ebola Response Team calculated the basic reproductive number (denoted by R0) of the virus for these countries. R0 of an infection indicates the number of cases that one patient can generate. If R0 is more than 1, the infection will spread. The study found that for Guinea the Ebola R0 has increased from 1.71 to 1.81 while it has fallen from 1.83 to 1.51 for Liberia and from 2.02 to 1.38 for Sierra Leone. The analysis was published in the New England Journal of Medicine on October 16.

But effective preparation can help check Ebola’s spread.“We may not be able to prevent the start of an outbreak, but if we have an adequate surveillance and response system, we can quickly step in and quash it before it expands,” says Martin Meltzer, lead researcher at the Ebola Response and Modelling Task Force, Centers for Disease Control and Prevention, US. Nigeria and Senegal have managed to rid themselves of Ebola by setting up effective surveillance and response system. “The cost of setting up such a system is remarkably small,” Meltzer says.

With a large number of Indians working in Africa, there is a huge possibility of the disease entering India. The Union Ministry of Health and Family Welfare says it has put in place the same surveillance and tracking systems to check Ebola that proved successful in Nigeria. Thermal scanners have been set up in most of the 15 major airports and more are likely to be purchased and installed.

Union health minister Harsh Vardhan claims that India already has an Integrated Disease Surveillance Programme. He says the National Institute of Virology at Pune has been equipped to handle the testing work relating to Ebola virus and Delhi-based National Centre for Diseases Control can conduct molecular diagnosis. Vardhan says over 22,100 passengers have been screened till October 15. Of these, 56 were identified to be at a high risk of Ebola infection and seven at medium risk. These suspected Ebola patients are being kept under observation for 30 days. But these measures may still not be enough because the disease has a long incubation period and the patients could travel away from the cities where arrangements for observing their health have been made.

“India has a huge population, and urban centres are very densely packed. This could pose a challenge because it would be very difficult to isolate patients and trace their contacts for observation. These elements could make containing Ebola more challenging in India than in some other countries,” says Peter Piot, co-discoverer of the Ebola virus and director of the London School of Hygiene & Tropical Medicine. “This is an opportunity for the Indian health service to strengthen its infection control measures,” he adds.

“Countering threats like Ebola requires a certain depth in health services and this is poor in India,” says Rajib Dasgupta, chairperson of the Centre of Social Medicine and Community Health, Jawaharlal Nehru University, New Delhi.

Most Indians coming from Africa have rural links, he says. But arrangements to observe suspected Ebola cases are virtually absent in rural areas. “You cannot quarantine everyone on the basis of suspicion and these people will move to villages,” he says. The Ebola surveillance system set up by the government is similar to the one established to control SARS. But in the case of SARS, suspected cases came from Hong Kong and China and were mostly based in urban areas in India where medical facilities are available.

Ebola is not the only threat the world is facing. WHO’s International Health Regulation Emergency Committee is closely monitoring two other diseases: polio and Middle East Respiratory Syndrome Coronavirus. Just this year, WHO has reported outbreaks caused by 10 different pathogens. Other than the ones mentioned above, there have been cases of chikungunya, Marburg virus disease, enterovirus D68, avian influenza viruses A(H7N9) and A(H5N1), cholera and yellow fever.

Dealing with such diseases on a case-by-case basis is not sustainable. “A stronger public health system is an essential component of any effective surveillance system and rapid response. This requires going into the communities to assess the spread and impact of a disease and the effectiveness of any intervention. These functions are not typically carried out to any major degree by healthcare systems such as hospitals and clinics,” says Meltzer.

Fisman says that it is time countries start making big investments in public health. “Free markets do not support ‘public goods’, like infectious disease control, well. There is a role for governments and the UN in making the world safe from such threats.”

Scale up the supply of experimental Ebola drugs