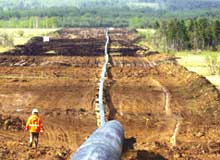 Conservationists have disapproved as inadequate a recent move by oil major Shell to protect the western grey whales along the eastern shore of Russia's Sakhalin Island. Shell announced on March 30, 2005 that it will not route its multibillion-dollar oil pipeline through the whales' feeding ground. The pipeline will be laid 20.9 kilometres south of the earlier route but the new oil drilling platform will be at the same distance from the feeding ground as planned earlier. Environment group Friends of the Earth fears this will disturb the whales.

Whale specialist Randall Reeves, who chaired a report by the iucn- World Conservation Union on these whales, commissioned by Shell, agrees. He suggests the platform should be as far away from the whales as possible. But Ian Craig, chief executive of Shell's project in the area, says it is "not practical" to change the new platform's location.