Organisation estimates that unsafe food contributed to 351,000 deaths in 2010 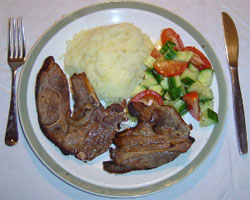 The World Health Organization has called eating food contaminated with bugs a “global threat” and estimated that it led to more than half a billion cases of illness a year and contributed to 351,000 deaths in 2010.

In its first report on this issue, WHO Director-General Margaret Chan said, “Food production has been industrialised, and its trade and distribution have been globalised. These changes introduce multiple opportunities for food to become contaminated with harmful bacteria, viruses, parasites or chemicals. A local food problem can quickly turn into an international emergency.”

The report, which pulls together scientific literature from across the globe, shows that most deaths are caused by pathogens such as salmonella, E. coli and norovirus. It also shows that the majority of lives lost are in Africa and South East Asia and 40 per cent of the deaths are among children under 5 years, the most vulnerable group.

Following the publication of the report, the WHO is calling on governments to urgently strengthen food safety systems. On April 7, the WHO will launch its food safety campaign, “From Farm to Plate”. It aims to prompt the public and governments to consider where individual ingredients in meals come from and question whether these are properly and safely handled at every stage.