Malnutrition and stunting is higher in the country than in the poorest parts of sub-Saharan Africa, says a report by UNICEF and FAO

Forty five per cent of India's children are stunted and 600,000 children under five die each year, largely because of inadequate water supply and poor sanitation, reads a report by UNICEF and Food and Agriculture Organisation (FAO). The report, Water in India: Situation and Prospects, is the first cross-sectoral assessment of the state of water resources in the country.

It is estimated that around 37.7 million Indians are affected by water-borne diseases annually, 1.5 million children are estimated to die of diarrhoea alone, and 73 million working days are lost due to water-borne diseases each year. In 2002, unsafe water and poor sanitation contributed 7.5 per cent of total deaths and 9.4 per cent of total disability-adjusted life years in India, according to a 2008 WHO study. 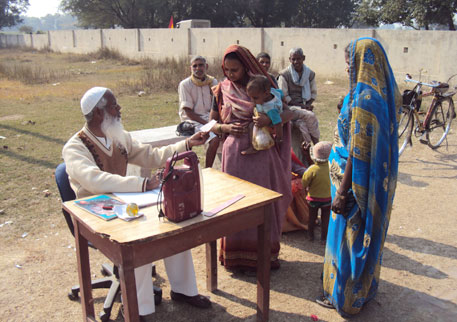 One-third of all deaths of children under five years of age in India are due to diarrhoea and pneumonia. Many more children who survive have weakened immune system because of diarrhoea, pneumonia, malaria, and worm infestations, and become underweight and malnourished, which has a severe impact on their learning ability throughout their lives.

"Rural poverty is higher in India than in most parts of Africa, but children in the country are shorter and more underweight because their bodies use up all energy to fight frequent infections, lowering their strength and growth," said Aidan Cronin, Child's Environment Programme, UNICEF.

Surveys have estimated that over one-third of rural groundwater sources in India may be contaminated with microbes, much of this contamination is preventable through proper operation and maintenance of water sources coupled with safe sanitation practices.

The Central Pollution Control Board's analysis of water quality monitoring results from 1995 to 2009 indicates microbial contamination as the predominant form of pollution in surface water bodies in India. It was observed that nearly 64 per cent of the surface observations had biochemical oxygen demand (BOD) less than 3 mg/l, 19 per cent between 3-6 mg/l and 17 per cent above 6 mg/l (the level of BOD in water, measure of organic pollution, should not exceed 3mg/l). This has been attributed to two main reasons.

Across the world unsafe drinking water and poor sanitation and hygiene are the main contributors to an estimated four billion cases of diarrhoeal disease, causing more than 1.5 million deaths, primarily among children under five years of age. Although the water access figures in India show an increasing trend, access to safe drinking water remains a challenge in rural areas. About 638 million people in India still defecate in the open and 67 per cent of Indian households do not treat their drinking water. Likewise, in urban areas water supply pipelines and open drainage channels running side by side put the safety of drinking water at stake.

Many stretches of major rivers passing through industrial towns and cities are critically polluted. In the holy city of Haridwar, the Ganges has been showing the worrying trend of increasing BOD values from about 2 mg/l in 2002 to almost 5.5 mg/l in 2008. The major pathogenic organisms responsible for waterborne diseases in India are bacteria (E. coli, Shigella, V cholera), viruses (Hepatitis A, Polio Virus, Rota Virus) and parasites (E. histolytica, Giardia). Poor waste disposal facilities also contribute to pollution of water bodies by means of leaching.

The report states that while access to improved drinking water sources in India has increased over the past decade, the tremendous adverse impact of unsafe water on health continues. Microbial pollution in water is also responsible for disease burden, especially due to poor sanitation and hygiene practices. Infectious diseases linked to water can be categorised as waterborne, water-related, water-based and water-washed diseases.

These pathogenic organisms are transmitted mostly due to contaminated water, improper sanitation and poor hygiene practices exacerbated by large volumes of untreated sewage generated daily in major cities. In the rural areas, due to the widespread practice of open defecation (69 per cent of the rural population defecates in open) and poor operation and maintenance of water sources, microbial contamination occurs in surface and groundwater bodies.

Also, approximately 74 per cent of the rural population does not use any water disinfection method. A 2004 report by McKenzie and Ray show that India loses 90 million days a year due to water-borne diseases. Poor health due to inadequate sanitation is also an economic burden.