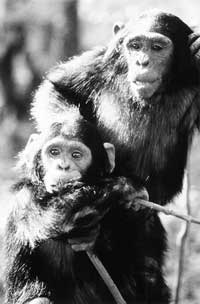 a number of cloned monkey embryos that look healthy are in reality a "gallery of horrors" deep within. This was revealed during a study done by a researcher of Advanced Cell Technology (act), a us-based company that recently cloned human embryos for the first time in the world history. The study of Tanja Dominko, the researcher, indicates that there is something unique about primate eggs that makes cloning monkeys or people far more difficult than cloning other animals. At the very least, the experiments show that there's a lot to learn before primates can be cloned ( www.newscientist.com , December 12, 2001).

During the past many years, several groups have cloned monkeys. But while the embryos look normal, no one has ever got them to develop further. To try and figure out what was going wrong, Dominko looked at 265 cloned rhesus macaque embryos created by nuclear transfer -- plucking out an egg's nucleus and then adding a nucleus from a donor cell. She followed development of the embryos through several divisions, from the two-cell stage until the 32-cell stage. Though they appeared superficially healthy, the cells in the vast majority of Dominko's embryos did not form distinct nuclei containing all the chromosomes. Instead, the chromosomes were scattered unevenly throughout the cells.

"The surprising thing is that these cells keep dividing," says Dominko. Some embryos developed to the stage known as a blastocyst, but by day six or seven they had started to look abnormal. The cloned human embryos created by act didn't even get this far. Only one reached the six-cell stage.

Dominko says that the trauma of removing the nucleus from the egg might be what triggers the defects. Eggs whose nuclei are removed and then put back inside show the same abnormalities, as well as evidence of programmed cell suicide. "This is not to say that normal embryos can't be made, but not on a regular basis," says Dominko. Ian Wilmut, who created Dolly -- the first cloned sheep, said that Dominko's results were not surprising in the light of experience of nuclear transfer in mice and cows. Even in these animals the success rates are not high, so the phenomena observed by Dominko probably occur in them as well.