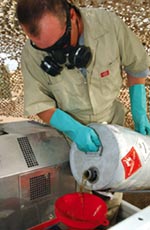 Clearly betraying a strong pro-industry bias, the us Environmental Protection Agency (epa) has observed that the country's federal law bars suits from being filed against pesticide manufacturers when a product does not deliver what its federally approved label promises.

The latest approach makes a blatant departure from the position epa adopted during the Clinton administration. In a 1999 case, the agency had stated that the federal law did not bar walnut farmers from suing pesticide manufacturers, because the former had suffered crop damage because the product labels had not clearly warned about the risks of mixing chemicals. "This is a total change in perception," lamented Tom Buis, vice-president, government relations, National Farmers Union. "...The farmers' liability isn't just what they spend on that pesticide, but their entire crop," he added.