Up in arms along the coasts 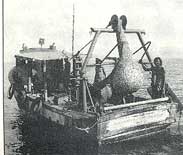 Indian fisherfolk are up in arms against the foreign trawlers that have been permitted to fish in India's coastal waters by the Indian government. The leaders of fisherfolk associations from 9 maritime states have threatened to go on an indefinite strike from November 23 and prevent foreign fishing trawlers from entering Indian territorial waters.

Fisherfolk's associations from Maharashtra, Gujarat, West Bengal, Goa, Tamil Nadu, Kerala, Orissa, Andhra Pradesh and Karnataka have formed a National Fisheries Action Committee to protest against the government's policy of opening up the Indian coast to outsiders. Thomas Kocherry, the convener of the committee, announced a nationwide campaign to rally for public support against largescale mechanised fishing by foreign companies.

While indiscriminate mechanised fishing endangers the marine ecosystem, it also threatens the livelihood of more than 75 lakh fisherfolk in the country. Bottom trawling for prawns can destroy many species and deplete many others. Studies by the Central Marine Fisheries Research Institute reveal that the prawn catch has come down from 82 kg per hour in the '60s to 12 kg in the '80s. Besides, although traditional fishermen operate within 22 km from the coastline -- where the water depth is 50 m -- appropriate institutional mechanisms do not exist to check big trawlers, which have permission only for deep sea fishing, from poaching in the reserved area.