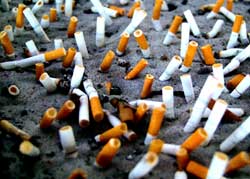 in the first week of July, the Florida Supreme Court (sc) upheld an earlier lower court ruling that rejected a us $145-billion award, the largest-ever against tobacco companies. It said that an estimated 300,000 to 700,000 people from Florida, who suffered from the ill-effects of smoking and were part of a class-action suit, would have one year to sue as individuals.

The case was filed in 1994 in a Florida lower court, as a nationwide class action by us smokers against the tobacco industry. Named after one of the leading petitioners, a paediatrician called Howard Engle, the case was the first personal-injury case against tobacco companies that actually reached the trial stage.

In 1996, tobacco companies appealed in the third district Court of Appeals, which limited the suit to just Florida's 700,000 smokers. In 2000, the lower court jury ruled in favour of the petitioners awarding them us $145 billion. In 2003, the appeals court reversed the us $145 billion in punitive damages because it felt the group of smokers and non-smokers was too diverse to be clubbed together for claiming damages. The sc upheld this ruling but allowed individuals the right to file individual cases for damages. Several other parts of the lower court ruling have also been accepted. The sc upheld the trial jury's observation that tobacco companies misled the public about the dangers of tobacco and its addictiveness.

Michael Allen, a professor of law at the Stetson University College of Law in St Petersburg, Florida, said he's already seen advertisements of attorneys looking to drum up business in the wake of the sc ruling, which is expected to bring an onslaught of individual smokers' claims. He said the ruling could be both negative and positive for individuals who sue tobacco companies.

The decision has led to an increase in share prices of tobacco companies. It also freed up more than one billion dollars set aside by the tobacco companies for damages. But the funds are likely to be contested.

Tobacco companies, including Marlboro manufacturer Philip Morris, had set aside us $709 million after losing the case in the lower court.

The tobacco companies had agreed to forfeit this money, regardless of the case's ultimate outcome, so as to enable them to appeal against the us $145 billion award. It was expected that this money would be paid out to Florida smokers irrespective of who finally wins.

But the tobacco companies are now likely to question how the money is to be disbursed to a class of people that the court claims does not exist.