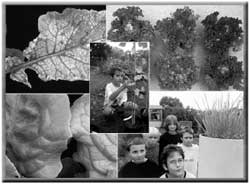 just as birds stop chirping and go into hiding before a storm and ants begin to march before it starts pouring, some plant species can warn of possible environmental damage -- they act as 'bioindicators' of pollution. The Second International Conference on Plants and Environmental Pollution organised on February 4-9, 2002, by the Lucknow-based National Botanical Research Institute (nbri) provided a platform for researchers to come forward with their studies on the subject and create awareness about it. The conference also mirrored the extent to which pollution is damaging plants.
The bioindication technique is based on the fact that plants are affected by pollution. "For the first time, links between increase in air pollution levels and plant damage were seen in California during 1950s," said David Grantz from the us-based University of California (ucla). Increased vehicular pollution during this period was reflected in damaged foliage and stunted growth of plants in the area. This linkage has become even more stronger today, indicate studies by Varanasi-based Banaras Hindu University (bhu). They show how spinach yield decreases by almost 40 per cent in polluted environs. Even the nutritional value of the plant products is affected. This happens as pollutants restrict food movement from the leaves to the roots. A study carried out by ucla further explains this phenomena. According to it, less food means a stunted root system that makes plants prone to 'physiological drought', wherein the roots are not able to absorb water. This further affects plant growth.

There are endless examples of the adverse interface between air pollution and plants. Extremely high levels of carbon dioxide make plants susceptible to diseases, proves a study by the University of Queensland, Australia. Research by China's Yunnan Agricultural University indicates that enhanced exposure to uv-b radiation decreases biomass and grain yield in soyabean plants. Research by Cairo and Helwan Universities in Egypt proves that salts and gases of chlorine cause deformation in plant cells.
Due to such visible effects, plants that are very susceptible to environmental pollution can also be used as bioindicators. They are now being acknowledged as effective alternatives to mechanical instruments for gauging pollution levels. Moreover, bioindicators facilitate effortless awareness generation among the masses, as they themselves are able to assess the damage. "Using bioindicators hardly involves any cost," said M S Swaminathan, director of Chennai-based M S Swaminathan Research Foundation (mssrf). According to William J Manning of the us-based University of Massachusetts, plants can even indicate how other living organisms are being affected by pollution. This does not hold true for mechanical instruments.

The most preferred bioindicators are the ones showing visible injury: necrosis (browning of plant leaf), chlorosis (yellowing of leaf tissue) and alterations in growth. The invisible injury symptoms include decrease in germination potential of pollen grains.

Selection of bioindicators varies from region to region, depending on climatic and geographical conditions and the availability of plants. "A good bioindicator must be quick in showing its response to pollutants," says C K Varshney, professor at the New Delhi-based Jawaharlal Nehru University. For their successful use, it is necessary to analyse the ratio between plant degradation and the levels of pollution. This is called standardising the plant's response. Germany has been quite active in doing so. It has standardised the following plants:
• Bel W3, a variety of tobacco. When exposed to ozone for 14 days, its leaves show necrosis

• Poplar tree. Within three months, ozone damages the tissue of its leaves

• Tradescantia plant. The dna of its pollen grain gets damaged within 30 hours of exposure to pollution

• Rye grass. Sulphur compounds and heavy metals accumulate in its blades when exposed to pollution for 28 days

• Curly Kale, a vegetable. This accumulates polyaromatic hydrocarbons in its leaves after 10 weeks of exposure

All these plants are being used for measuring air pollution -- the main focus of the bioindication technique. At present, they are being extensively used in the EuroBionet project launched by the Institute for Landscape and Plant Ecology, University of Hohenheim, Germany. The project is being implemented in eight European cities. Its main focus is involving common people to assess the levels and impact of pollution.

uk-based Stockholm Environmental Institute in also planning to use bioindicators in its Regional Air Pollution in Developing Countries (rapidc) project. rapidc is aimed at generating data to facilitate development of agreements and protocols to control air pollution.

Bioindicators can even show that an area is free of air pollution. "Fungi such as Diplocarpon rosae cause black spots on rose leaves which indicate absence of excess sulphur dioxide in the air," says J N B Bell of Imperial College, Berkshire, uk.

They can even be used to assess water pollution. A study carried out at Sonvad dam in Maharashtra by researchers of Dhule-based Science College revealed that algae like Euglena and Oscillatoria grow only in water having high organic content. Presence of aquatic plants such as Vallisnaria in a water body suggest that it is relatively free from pollution, showed a study conducted by the Indian Statistical Institute, Kolkata.


Despite their numerous benefits, usage of bioindicators across the globe has failed to live up to the expectations of many. Even in India they are not being promoted much. Fields tests are hardly conducted to test the viability of research. Moreover, researchers are unaware about the complete extent of damage caused by pollution. "What is required is applicable research," says P V Sane, former director of nbri. "Networking within research institutions is a must for the success of this technique," says Madhoolika Agrawal, a reader at bhu. At present, researchers are simply trying to imitate methods followed in the West. "This proves ineffective because of a difference in geographical and climatic conditions," says Sagar V Krupa, a professor at the University of Minnesota, usa. According to Sane, plants that can be standardised should be documented first. This would help in evolving stringent protocols that would grant bioindicators a legal status.

Secondly, for encouraging masses to use this method, awareness about their benefits should be generated, opines Roger M Cox from the Canadian forest services. "If they understand the problems, they might start using cleaner technologies," says Andreas Klumpp, a professor at the University of Hohenheim, Germany. Involving panchayats (village councils) would also help, suggests P Pushpangadan, director of nbri.

However, some experts opine that caution needs to be exercised. According to Maria J Sanz of the Centro De Estudios Ambientales Del Mediterraneo, a Spain-based research organisation, it is easy to confuse between disease symptoms and the visible effects of pollution.