The search for the source has just begun 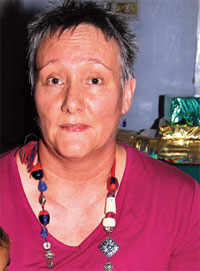 THEY are 149 in all—mostly children below 13 and a few adults. They are being treated for autism, cerebral palsy and mental impairment at the Baba Farid Centre for Special Children in Faridkot, Punjab. They are mostly from Punjab though there are some from Tamil Nadu, West Bengal and even abroad. They are in the spotlight now because traces of uranium have been found in hair samples of most of them. It was a chance finding. A UK-based clinical toxicologist, Carin Smit, visited the Faridkot centre last year. Intrigued by development disorders among so many, she wanted to find out the reason.

She collected hair samples of 149 children and adults from the centre and sent them to a laboratory in Germany. Tin, lead, aluminium, manganese and iron were present in a majority of the hair samples. Smit was not surprised; as a physician who studies the nature and effects of toxins she had suspected the presence of these heavy metals even before she sent the samples to the lab. What she had not anticipated was the presence of uranium. Yet it did show up in more than 80 per cent of the hair samples.

“We were not testing for uranium. We were testing for heavy metal toxicity and traces of uranium showed up. We need to do more tests now to find the level of uranium present in the body,” said Smit. The lab report said the trace of uranium in samples indicated the level was high enough to cause disease. “I am distressed that uranium has been found in the samples. I don’t know what will happen to my child now,” said Devinder Singh, father of seven-yearold Yuvaraj, who is being treated at the centre for cerebral palsy.

Smit was in Faridkot in the last week of March to collect more samples. She took urine samples before and after administering chelating agents to remove the heavy metal, including uranium. Smit said this will show the level of uranium present in the body. The test results are expected in June.

“Tests need to be done to see if uranium is one of the causes of autism,” said Harish Babu, naturopath at the centre where treatment is done through naturopathy, neurotherapy and yoga. South African-born Smit learnt of the centre through Ankit Sharma, an autistic child, who came to her eight years ago. Ankit was seven then and living in Botswana. When Smit’s treatment did not show much result, Ankit’s parents brought the child to the Faridkot centre in 2006. Improvement in Ankit’s condition prompted Smit to visit the centre last year.

“Punjab is already suffering due to a cocktail of pesticides and heavy metals present in the groundwater. It is too early to say uranium caused autism. It could be one of the chemicals disrupting neuro-transmitters,” said Neelam Sodhi, gynaecologist in Ludhiana. What has baffled many is the presence of uranium in the samples when there are no uranium mines in Punjab. Speculation abounds. One of the theories doing the rounds is that the uranium came from Iraq where the US army used uranium in its warheads.

Prithpal Singh, director of the Faridkot centre, finds a connection. There is a thermal power plant in Bathinda, the neighbouring district. Forty of the 149 samples tested were of children and adults from Bathinda. The uranium traces Smit stumbled upon have triggered a flurry of activity.

A three-member team of the Department of Atomic Energy reached Faridkot from Mumbai on April 6. “We have collected hair samples and soil, water and food samples from the Faridkot centre,” informed Swapnesh Malhotra, member of the investigating team.

The state government too sent a team—of five. It collected water and soil samples from the Faridkot centre and sent them to Punjab Agricultural University, Ludhiana. They have also collected hair, blood and urine samples of five children and their parents which, a doctor on condition of anonymity, said have been sent to Bhabha Atomic Research Centre, Mumbai.

The parents, who are trying to come to terms with the presence of uranium in their children’s hair samples, are upset with the state government team. “They did not bother to seek our consent. They were crude and insensitive.

They simply pulled out hair from my child as a sample. They even used the same syringe and needle to take blood samples of all members of the family,” said Devinder Singh. In a fit of rage, the parents even spoke of suing the government, he added, but once the anger died they agreed there was no point.