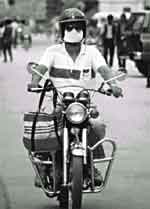 according to a study printed in the British medical journal, The Lancet, industrialisation has brought a host of diseases, from cancer and brain tumours to depression. It says that development also increases people's susceptibility to respiratory diseases and allergies. British and Ethiopian doctors sent questionnaires to some 10,000 households in Jimma, a city in southwest Ethiopia that is starting to develop economically, as well as to about 3,000 rural families. Urban residents reported significantly more cases of asthma and skin sensitivity to house dust mites than their provincial counterparts. Researchers also discovered that respiratory distress appeared to be linked to housing style, bedding materials and the use of certain insecticides. However, none of this can reduce dust kicked up by construction or pollution belched by automobiles - problems that residents of Asian cities must face daily. Experts say that ultimately the only real way to prevent the spread of asthma and allergies is to adopt development policies that take these risks into account.