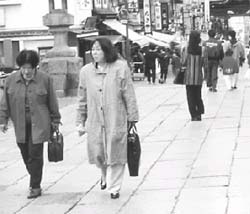 contrary to popular belief that city dwellers, who have access to better medical facilities, live longer than their country cousins, recent research has revealed that rural residents have longer lifespans. The life expectancy ranking of Tokyo residents, who outlived people living in other prefectures until 1980 -- and therefore held the world longevity record -- had dropped to 20th for men and 33rd for women by 1995.

Meanwhile, the ranking for people in rural areas rose, and the gap between urban and rural residents' lifespans has been widening steadily in recent years. Researchers attribute this trend factors as access to clean air and water, the lower stress of country life and sociological differences. A research team headed by Tanji Hoshi, a professor of the Centre for Urban Studies at Tokyo Metropolitan University, analysed the trends using data of the health and welfare ministry, among other sources. That analysis has now been published in a book titled Toshi no Kenko Suijun (Health in the Cities). According to the team, the life expectancy of Tokyo residents, which outranked that of all other Japanese in 1965, had fallen far behind by 1995.

The life expectancy of residents in other highly-populated prefectures -- including Osaka, Aichi and Kanagawa -- also fell. Rankings for residents of Osaka dropped from 12th to 45th for men and 13th to 45th for women. The rankings for Aichi residents dropped from fourth to 21st for men and from seventh to 42nd for women. Male life expectancy, meanwhile, rose sharply in rural areas such as Nagano, Fukui, Kumamoto and Toyama prefectures while Kumamoto, Shimane and Nagano recorded the most dramatic extensions in female longevity.

Although improved medicine is often credited for the rise in rural life expectancy, the gap between rural and urban rankings cannot be attributed to this factor alone. Analysis of the 1995 death rates for the 23 wards that make up the Tokyo metropolitan area, showed that youth mortality was below the national average. The university research team, based on their data for each of Tokyo's municipal wards, also found that cancer deaths per capita decreased in direct proportion to the distance of one's home from the city.

Researchers point out that prefectures where life expectancy is greatest have something in common: all are in mountainous areas, where the air and water is pure. The report concludes: "No matter how advanced the purification system for tap water in our cities becomes, the level of substances liable to disrupt the hormonal balance or induce cancer cannot be lower than that found in natural springs. "High mortality rates among the middle-aged and elderly living in the cities may be ascribed to such factors as long-term exposure to these substances, the stress of commuting, long working hours, and the shallowness of personal relations."